Avoiding “Mixed Messages” (in times of COVID-19): Towards a Consistent EU Position on World Order 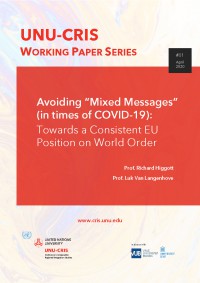 This paper makes the case that the EU must not send out mixed messages. It cannot go down the road of adopting a forward leaning geopolitical strategy, while at the same time wishing to maintain its wider commitment to collective action problem-solving. In today’s unravelling of the post-World War Two world order, the EU’s longstanding instinct to resist geopolitical imperatives in favour of a commitment to collective action in multilateral institutional contexts should remain.

Therefore, the priority for the EU is  to remove ambiguity from its external policy by focusing specifically and precisely on topics and regions that matter to citizens directly: security, migration, climate, but also on other things that might seem one step removed from everyday life yet actually have a considerable impact on citizens, such as the defence of multilateralism and the situation in the near neighbourhood.

This paper sets out nine key points of substance for consideration. They are presented as a series of propositions in need of recognition by those driving EU international relations in the life of the next Commission.

If the EU really believes in its internationalist values, it should stick to them and make it clear that it is driven by the pursuit of geo-sustainability through multilateral cooperation, not by geopolitics and its related nationalist assumptions of closure to the wider world.

This, the paper argues, becomes even more important in a time of global pandemic. 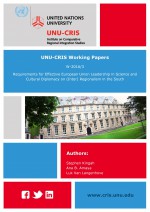 Requirements for Effective European Leadership in Science and Cultural Diplomacy on (Inter) ... 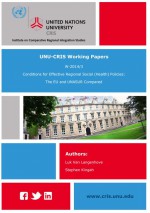 Determinants of Regional Organisation’s Global Role in Peace and Security

Determinants of Regional Organisation’s Global Role in Peace and Security

The Case for Divergence in the Governance of the Global Economy Sovereign Rules for Finance, ...