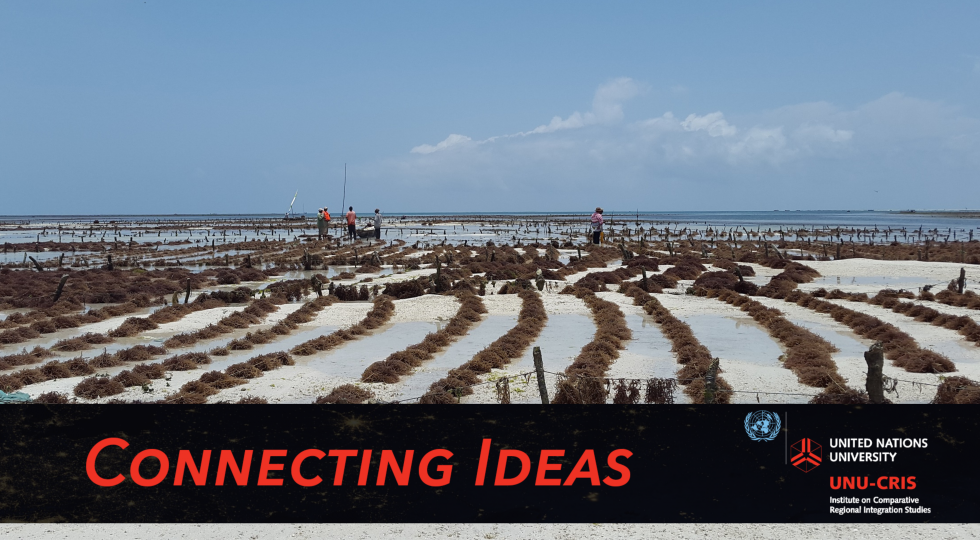 This blog was originally published by GlobalDev and is available to read in English, French and Spanish.

Over six million smallholder farmers across 48 countries depend on seaweed for their livelihoods. This column outlines what’s currently happening in this little known industry and explains seaweed’s potential as a ‘wonder crop’ that can make a considerable contribution to the pursuit of key development objectives. But like the global banana industry, seaweed production is based on very limited genetic diversity. This is increasingly problematic as climate change affects where seaweed can be grown, with serious consequences for some of the world’s poorest families living in coastal communities.

The world is waking up to the potential of seaweed. Since the 1950s, seaweed production has rocketed from half a million tonnes per year to over 35 million tonnes today: a 15-fold increase in just over half a century. The total value of the global seaweed market is estimated at US$15 billion.

Different types of seaweed have different uses. Some are staple foods in many Asian countries, but the so-called ‘red seaweeds’ produce carrageenan, a gelling agent that is extensively used in the food, beauty, and pharmaceutical industries. It can help to absorb carbon in the oceans, reduce the amount of methane emitted from cattle, replace fossil fuel derivatives with alternatives such as bioplastics and biofuels, and provide ‘functional foods’ that deliver essential nutrients for a healthy diet. No wonder there’s talk of seaweed as a wonder crop.

But these apparently healthy figures mask two significant problems in the seaweed industry. The first is that like the global banana industry, red seaweed production is based on very limited genetic diversity.

While there are many different varieties of banana (as many as 84 varieties in Uganda alone) the global industry has continued to rely heavily on just one – the Cavendish, bizarrely first grown in the hothouse of an English stately home. Commercial banana production was wiped out in the 1950s by a strain of Panama wilt fungus. The Cavendish variety proved to be resistant to that particular strain and hence was planted everywhere, but it’s proving highly susceptible to a new strain that emerged in the 1990s.

Like bananas, seaweed is very easy to grow. You break off a few stems from the crop you have just harvested and tie them to a rope anchored to the seabed. After about 45 days, you’re ready to harvest and the cycle repeats.

But like bananas, what you have grown is genetically the same as its parent. Seaweed does reproduce sexually, which increases genetic diversity, but it needs to happen in a lab because the seedlings get washed away by ocean currents.

Because this vegetative propagation is so easy and because red seaweed is resilient to being transported over great distances, a global trade in seedlings was established quickly in the 1950s. It first took off in Indonesia, before spreading to China, Japan, Korea, and the Philippines, and onwards to other countries like Tanzania.

This wasn’t a problem until climate change started to affect seaweed production. Warming sea temperatures cause stress for seaweed, and increase its susceptibility to pests and diseases. In Zanzibar, for example, the maximum recorded temperature of inshore coastal waters has risen from 31oC in 1990 to 38oC in 2020. The value of the Tanzanian seaweed crop declined from US$4.3 million in 2015 to US$2.4 million between 2016 and 2020.

The Food and Agriculture Organization of the United Nations has been looking at banana production for many years, but until 2021, there was no international body overseeing seaweed health. There were also no global regulations on how seaweed propagules should be traded to promote the exchange of healthy crops, maintain genetic diversity including within wild populations, and reduce the risk of introducing pests and diseases to new areas.

The second problem is that seaweed is often grown by some of the poorest people in coastal communities. Over six million smallholder seaweed farmers and their families, across 48 countries, depend on seaweed for some or all of their livelihoods. But they’re struggling to deal with the effects of climate change.

Seaweed is a good crop for poor farmers, as it only requires a few cheap inputs: some ropes and wooden pegs, plastic ties to attach the seedlings to the ropes, and somewhere to dry it. Because seaweed needs little upfront investment, and because it only takes 45 days from planting to harvesting, it is an ideal crop for people who have few other income-earning opportunities.

In the Philippines, seaweed has provided a good livelihood for several generations of farmers. Elsewhere, seaweed is mixed in with fishing, shellfish harvesting, some land-based agriculture, and petty trading. But as in Tanzania, climate change is forcing many farmers to reassess whether they can continue to farm seaweed.

This is particularly likely to affect women farmers: cultivating seaweed is often a whole family affair, with women making equally important contributions to planting, cleaning, and drying. But as seaweed production moves into deeper, cooler waters, it needs boats and the ability to swim – both of which are often out of reach for women who struggle to take out loans to buy a boat or who, for cultural reasons, haven’t been taught to swim well.

Climate change is also likely to affect the poorest farmers disproportionately. They often grow seaweed on contract to larger farmers, taking what prices they can get.

Government programmes tend to automatically overlook both women and poorer farmers, registering only better-off men. This means that the all-important information about how to farm seaweed sustainably won’t reach those who are actually doing the farming.

A sustainable red seaweed industry could make a great contribution to four of the Sustainable Development Goals: SDG 5 (gender equality), SDG 8 (decent work and economic growth), SDG 13 (climate change), and SDG 14 (life below water). But to do so requires a whole-system change, learning quickly from the banana industry.

Smallholder seaweed farmers need to be able to replant with genetically diverse and biosecure seedlings. This means building biobanks to maintain genetic diversity and to breed improved cultivars. It means researching where genetic diversity exists in the wild and how to breed from it.

But it also means a wider effort to understand who exactly are the seaweed farmers, and what economic and environmental risks they face. It means encouraging the development of alternative seaweed products so that farmers aren’t dependent only on volatile carrageenan prices and can make longer-term investments that help them manage their risks sustainably. And it means emphasising the traceability of seaweed products, using mechanisms such as blockchain to recognise and reward sustainable, inclusive, and gender-sensitive seaweed production strategies.

This is an ambitious agenda, but it’s essential if the global seaweed industry is to fulfil its considerable potential.