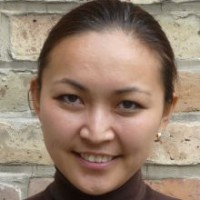 Ms. Salimzhuarova graduated at the Eurasian National University named after L.N. Gumilev, Department of International Relations. Her Diploma paper was concerned with the evolution of the economic institutes of the Commonwealth of the Independent States, where she had considered the integration process on the post – Soviet Union area and the place of the CIS countries nowadays.

During her internship, Ms. Salimzhuarova was a graduate student at Global Studies Programme at Albert Ludwigs University Freiburg. In the framework of the Master programme that she was enrolled in. Aliya has also studied at FLACSO (the Latin American School of Social Sciences) (Argentina) and at Jawaharlal Nehru University (India). Her research interests concerned the issue of regional and inter-regional cooperation, particularly, the processes of regional/political identity formation.

While at UNU-CRIS, Aliya Salimzhuarova worked under the supervision of Dr. Stephen Kingah until the end of October 2011. 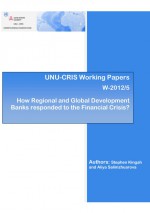 How Regional and Global Development Banks Responded to the Financial Crisis 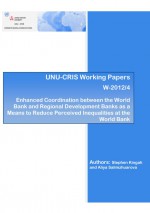 Enhanced Coordination between the World Bank and Regional Development Banks as a Means to ...