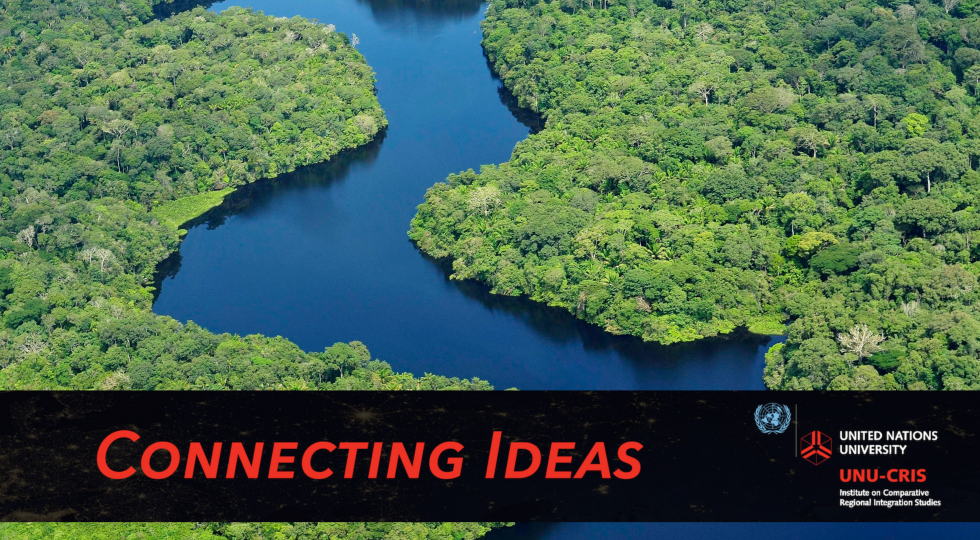 Regional Director for Latin America, Global Network for the Study of Human Rights and the Environment (GNHRE)

This blog draws from the recent webinar, Protecting the Amazon Region: Governance Gaps, organised by the ERC Curiae Virides Project of the Brussels School of Governance, together with the Institute of Population Health Sciences (IPHS) of Queen Mary University (United Kingdom) and UNU-CRIS. It sought to provide a multidisciplinary view on some of the main governance challenges, actions adopted so far, and perspectives for the future.

According to the WWF, the Amazon Forest represents a fundamental ecosystem for the survival of the world population. This is because, almost a third of tropical rainforests left on Earth are in the Amazon region and nearly 10% of all wildlife species discovered up to now live there. Notwithstanding, governance gaps are structural and complex. Major challenges arise from deforestation and forest fragmentation with dramatic impacts on ecosystem deterioration and dysbiosis through biodiversity loss and contamination.

A planetary health perspective is necessary to address the governance of the Amazon region from decolonisation and environmental/climate justice perspectives. This region needs an integral participatory sustainable governance plan with an understanding and scoping of terms such Earth system governance, planetary health, health-centred environmental (and Amazonian) governance. For this purpose, planetary health challenges for all species need to be comprehended as historically grounded, shaped by complex phenomena such as colonisation, unequal power imbalances and land access, weak institutions, marginalisation of indigenous people, unequal contribution to GHG emissions, and to deforestation etc. It should also be addressed by encompassing environmental and climate injustice and environmental debt. Planetary health challenges cross state boundaries as ecosystems are interconnected, which further challenges the multiple levels of governance that act in a state-based and isolated manner. Although apparently the focus could be on the forest, human health depends on a functioning ecosystem that goes beyond forest, reflecting soil and overall species biodiversity. The interconnection of the forest with indigenous people’s knowledge about the use of its resources needs to be at the centre of policies seeking to protect the forest and its biodiversity to benefit the local, regional and planetary health of all species. Threats to indigenous communities such as Covid-19, uncover the fragility of the state capacity to protect the forest and its inhabitants who lack access to basic healthcare, and with increased vulnerability to new variants of the virus. Forest fires, deforestation and extractive economic activities are further aggravating the ecological and humanitarian crises.

Several regional initiatives have been proposed but none has been effective in preventing serious negative impacts on the Amazon Forest and its ecosystems, including indigenous people. This gap needs to be filled to reverse ecosystem destruction with serious implications for the entire planet. Regional cooperation is crucial to address deforestation in the Amazon region, since nine countries share jurisdiction over the forest. Within these countries, more than 20 subnational jurisdictions have diverse competences related to the forest. Brazil is a central actor because it holds jurisdiction on more than 50% of the forest. For the other countries the Amazon region is not negligeable either, because its area represents a significant percentage of their national territory. In terms of population, a consistent majority of the population of Amazon countries lives in urbanised areas, which perhaps explains the lack of urgency to address systematic and sustainable policies to preserve the forest.

Amazon countries have adopted a few binding as well as non-binding instruments to address the major threats, but with modest results. The Organizacion del Tratado de Cooperacion Amazonica (OTCA), created in 1995 to implement the Amazon Cooperation Treaty (signed in 1978 by all the Amazon countries but French Guyana), has implemented few effective projects such as the use of satellite technology to monitor deforestation. However, OTCA has not promoted or implemented strong policies to protect the forest because it lacks political will to overcome the limitations of national sovereignty. OTCA needs more engagement from all the state parties to increase impact beyond information sharing and formulate effective initiatives to address deforestation.  The Leticia Pact, in turn, a non-binding declaration adopted in 2019 by all the state parties of OTCA but Venezuela, also sought a sustainable use of the Amazon ecosystem via interstate cooperation channels to prevent or mitigate the most serious challenges. It was a response to the fires witnessed that year, but the results have not been visible yet.

Although the Organization for American States (OAS) is funding the OTCA, there are no clear synergies among both regional organisations. Currently six of the nine Amazon countries accept jurisdiction of the Interamerican Court of Human Rights (ICtHR), which in the advisory opinion 23/17 requested by Colombia, connected the need to protect the environment as a condition to protect human rights. The Court held that member states are due to regulate, supervise, conduct impact assessments, establish contingency plans and mitigate environmental damage once it has occurred (see an analysis here). However, it is not clear how these state duties can be enforced nor how they can systematically conduct studies to assess the adverse impacts of economic activities near, or in the Amazon Forest. Although this advisory opinion decision and the judgment Comunidades indígenas miembros de la Asociación Lhaka Honhat (NuestraTierra) Vs. Argentina refer to the need of protecting the right to a healthy environment (integrated into the San Salvador Protocol) in connection to the San Jose Pact, the ratio decidendi of the judgement did not protect the right to a healthy environment as such, but the right to property that indigenous communities hold on their lands. Both, the Interamerican Commission and the ICtHR have held that the need to protect ecosystems is connected to the rights of indigenous communities, the rights to life, to property and to the related rights to water and sanitation.

The most recent regional initiative, concluded in the framework of the UN Economic Commission for Latin America and the Caribbean (ECLAC), is the Regional Agreement on Access to Information, Public Participation and Justice in Environmental Matters in Latin America and the Caribbean, better known as the Escazu Agreement. Only six of the Amazon countries have signed it and, even worse, only Bolivia, Ecuador and Guyana have ratified it. This agreement could be a game changer in terms of protecting environmental rights and environmental/human rights defenders. Unfortunately, many national governments (signatories of the Leticia Pact) are reluctant to ratify it with the argument that it could be an obstacle for economic sectors. It is also regrettable because another common challenge for Amazon countries is the protection of environmental defenders, with Colombia and Brazil appearing among the top three most dangerous countries worldwide for environmental activism in  2020.

It is important to flag firstly, that Venezuela is only party of the OTCA, but not of the OAS or the Escazu Agreement. Secondly, France, having an overseas territory in the Amazon region (French Guyana) has not been active in supporting regional initiatives to protect the forest, which is unfortunate given its leverage as an EU member state. Some initiatives have been proposed to attract worldwide attention for the preservation of the Amazon, but so far, no concrete results are visible. The Ecuadorian Yasuni-Ishpingo-Tambococha-Tiputini (ITT) Initiative coordinated by the UNDP for instance, sought to fund the preservation of the ITT block of the Yasuni National Park from oil exploitation, but none of the key international players supported it sufficiently, and the Ecuadorian government decided to authorise oil extraction activities.

The EU, as a global policy actor, could have a key role in protecting the Amazon region. Yet, existing instruments seem insufficient. The EU's current flagship deforestation instrument, the timber market regulating Forest Law Enforcement, Governance and Trade (FLEGT) voluntary partnership agreements (VPAs), are likely too narrow in focus and too open-ended to address the Amazon challenges. Meanwhile, the EU-Mercosur trade agreement has received fierce resistance because, among other concerns, Brazil has not taken clear action to fight deforestation. The European Ombudsman and the European Parliament (EP) have also expressed concerns about the lack of attention to the sustainability impact assessment conducted by the London School of Economics (but released after the signature of the agreement).

Additional measures to mitigate the EU’s impact on global forest degradation and deforestation are being taken. The EP has insisted on an EU Directive to hold EU economic actors accountable for the deforestation risks in their activities and in those of their commercial partners. However, the scope and ambition of this Directive are still unclear. Recently the Commission has postponed its decisions on this topic. Even less clear is the fate of the multistakeholder commodity partnership agreements, which will likely promote sustainability and replace the FLEGT VPAs. Future developments will tell if and how these policies effectively address corporate environmental harms linked to EU consumption.

Finally, many social and environmental actors are bringing their concerns about the need to address the most serious harms against the Amazon Forest to courts. Litigation seeking to hold corporate groups benefiting from economic activities in the Amazon Forest accountable, have not been frequent in courts with territorial jurisdiction in Amazon countries. The OECD National Contact Points located in the region have not addressed any complaint regarding the harms caused to the Amazon ecosystems either.

Litigation claiming the protection of the Amazon Forest, or the fundamental rights of indigenous communities has increased, seeking governments to adopt effective actions in this respect. This option has multiple limitations, precisely because of the multiple national and subnational jurisdictions operating in the Amazon. Diverse lawsuits have been lodged to fight the main threats that diverge among the countries. Some of them are confronted with legal and illegal mining activities, including oil and gas. Others seek to prevent illegal activities such as deforestation, forest degradation, drug trafficking, or to prevent dangerous actions to fight drug trafficking, such as the aerial spraying of large areas in the forest with glyphosate. Lawsuits are based on relatively progressive constitutions of the Amazon countries, as all protect indigenous people's rights and the right to a healthy environment, with diverse scopes and modalities. Some countries allow collective actions, others stick to classical individual actions. Some allow claims of actual victims, whereas others allow claims in the interest of future generations. Some constitutions explicitly aim at protecting the Amazon Forest and Ecuador is the only country worldwide that explicitly grants constitutional rights to nature and stipulates ecocide as a crime. Paradoxically, the Ecuadorian Amazon seems to be the most affected, mainly by oil production.

The judgement of the Supreme Court of Justice of Colombia that ordered the government to take concrete actions for the protection of the Amazon region to guarantee the rights of future generations, has received attention but similar judgements have been adopted by subnational courts in Ecuador. Climate change lawsuits are also pending in Brazil and Peru. Besides climate change litigation, the enforcement of the Indigenous and Tribal Peoples Convention (ILO No. 169), ratified by the six biggest Amazon countries, has also been the legal source used by many environmentalists to claim the protection of the right to a prior and informed consultation of indigenous communities for the development of economic projects.  So far, mainly Colombian courts have systematically enforced this right, but this has not been the case in other jurisdictions such as Ecuador or Peru.

This review of governance instruments available to protect the Amazon Forest points to many pending issues to be addressed by researchers and policymakers. If you are interested to join the reflection group and future initiatives, please contact us via Clizaraz@vub.be