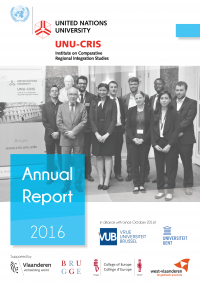 2016 has been an exceptionally moving year for UNU-CRIS. The Institute totally reinvented itself through new partnerships, a revised mission, a new government agreement and inevitably also a new – albeit ad interim – Director. Indeed, since the approval of the new Memorandum of Understanding (MoU) between the Flemish Government and UNU, two new structural partners emerged: the University of Ghent (UGent) and the Free University of Brussels (VUB). Both partners will, next to the structural aid that previously was provided by the College of Europe in Bruges, also contribute financially to UNU-CRIS through making available research grants and project funds. UNU-CRIS may henceforth benefit from the research capacity of both renowned universities, thereby widening its scope and research possibilities. All this was the result of a competitive call, issued by the Flemish Government at the end of 2015, whereby the Flemish universities were invited to draft collaboration proposals. The selection process, which took most of the first half of 2016, finally resulted in a new MOU that was approved by the Flemish Government in October and signed by all parties in the months that followed. The MOU now secures the funding for the institute for the next coming five years. The future for UNU-CRIS, therefore, looks very bright!

This, however, was not always the case. There were times in 2016 when UNU-CRIS’s future was questioned by the Flemish Government, its partners, or even UNU itself, as procedural delays casted a shadow over the continued functioning of the institute. In these difficult circumstances, Founding UNU-CRIS Director Luk Van Langenhove and his team did their utmost to keep the proverbial ship afloat, managing far more than that! Despite the uncertainties of their future, UNU-CRIS research fellows and staff managed to issue 84 publications (of which 8 books and 11 peer-reviewed articles) and were able to engage in more than a dozen academic and capacity-building activities. It co-organised the 5th “EU in International Affairs Conference” at the Palace of the Royal Academy in Brussels – an international conference that hosts more than 350 scholars and policy-makers from the five continents to discuss various aspects of regional (EU) integration. UNU-CRIS was also able to expand its external project funding for three years through its successful participation in a European H2020 project on Science and Cultural Diplomacy (EL CSID).

Despite difficult circumstances, the output and impact of UNU-CRIS did not fade. On the contrary: the hard work of the UNU-CRIS team in 2016 laid the foundations for UNU-CRIS 2.0 – the label that is used to mark the new start of UNU-CRIS since October 2016. Together with several scholars from UGent and VUB (mainly its Institute for European Studies), UNU-CRIS drafted an updated research strategy that more than before focuses on policy-oriented research, emphasising on the UN’s Sustainable Development Goals and on the limits of globalisation.

Financially, UNU-CRIS is also doing well. With the output of 2016, UNU-CRIS fulfils all governmental requirements so that its financing of the year is safeguarded, and with the new MOU, the future financing of the Flemish Government and of the two university partners is also secured.

But more change lies ahead. With the approval of the new MOU, the term of the founding Director came to an end and a vacancy for his replacement was launched. Bridging this interim period, I am having the privilege to lead this wonderful institute, integrating the new partners as much as possible and trying to lay the basis of what is to come. Based on a rich past, and with the willingness of all partners, we are confidently looking to the future with great anticipation, eager to start a new chapter in UNU-CRIS’s life. This report may be proof that the Institute can cope with challenging circumstances and still provide high quality output. In a more stimulating environment – as the future predicts – it may thus provide marvels!