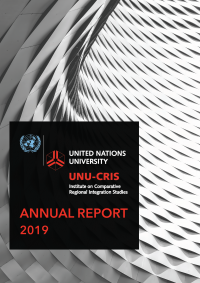 At the very moment of writing these words, in March 2020, the world finds itself in the midst of the COVID-19 crisis. It is impossible not to refer here to a challenge of such magnitude, as we collectively face an unprecedented threat. 2019 will forever be associated with COVID-19, even if it is only hitting the global population hard in 2020. This pandemic, as well as other earlier pandemics like AIDS (caused by HIV) and the swine flu (caused by the H1N1 virus), and epidemics with a more regional reach such as those caused by Zika virus, SARSCoV and MERS-CoV, invite – or rather, oblige – us to think about the response capacity of our health systems, the adequate levels of intervention, and the need for crossborder cooperation. It is clear by now that the latter is vital to adequately respond to the challenges of spreading infectious diseases that know no borders.

In regions across the globe, heated debates are ongoing on the role, or absence, of regional organisations in addressing this crisis. It is the case in post-Brexit EU where political leaders are exploring – under the pressure of the crisis – new ways to collaborate in an area which is essentially of national competence. In South America, there are ongoing discussions about potentially strengthened roles for Mercosur or the Andean Community in the area of health, or on the need for a South American cooperation mechanism in health to replace the one that existed under UNASUR. In mid-March, on India’s initiative, an emergency fund was created to tackle the health crisis in SAARC. ASEAN senior health officials are gathering to strengthen their collective response. The African Union just launched its Africa Joint Continental Strategy for COVID-19. ECOWAS ministers of health held an emergency meeting to exchange views on a regional response. This unprecedented crisis has brought about an unprecedented response, as similar debates are ongoing in other world regions.

This brings us straight to the core of the work at UNUCRIS, an institute created within UNU to specifically study how (supra-national) regional governance interacts with local, sub-national, national and global governance and policymaking; what its value added is or could be; which regional public goods are or should be produced; what roles regional organisations are actually playing; and how effective they are in tackling cross-border policy challenges. The current health crisis, with all the questions that it raises for the multi-level organisation of health policies in the future, only underlines the relevance of the work at UNU-CRIS.

Looking back at 2019, the year showed again a rich production of academic journal articles, books, reports, policy briefs, and other academic output on various aspects of regional and multi-level governance, in various policy domains. The topics touched upon by our scholars ranged across disciplines, as much as they did across regions, covering the Sustainable Development Goals, regional climate action, the United Nations Security Council, the crisis of multilateralism, regional economic and investment policy, African migration policy, to name but a few. All the details can be found in this Annual Report.

New doctoral research projects were started on topics such as 'Lobbying for forest justice? Transnational dimensions of forest justice advocacy in the European Union’s (EU's) Voluntary Partnership Agreements (VPAs)', 'Return in Context: The Impact of community members’ expectations on reintegration processes of returned migrants in Cameroon', and The complex dynamics of force and choice: Returnees’ experience and community perceptions in return migration processes', to name a few.

Beyond our publications, in 2019 we organised a range of events aimed at igniting debates, facilitating the sharing of knowledge, and training future generations, many of which were organised or co-organised with our partners, Ghent University and the Vrije Universiteit Brussel. Highlight include our inaugural Summer School, which examined the cooperation between the European Union and the United Nations in Global Governance, the Eighth Doctoral School on Latin American, European and Comparative Regionalism held in Quito, the final conferences of two of our projects, EL-CSID and AMIREG, and outstanding lectures from those at the top of their fields, such as Benedicte Frankinet on the challenges and opportunities facing the UN Security Council, and a celebration of 100 years of the International Labour Organization with its former president Luc Cortebeeck.

Apart from the new PhD Fellows, more new faces were welcomed at UNU-CRIS in the course of 2019. Prof. Samuel Standaert joined the team in October, we welcomed four visiting scholars from Brazil, China, the United States and Nigeria, and 20 interns from all corners of the globe. Additionally, we continued a strong collaboration with our associate research fellows, strengthening our global network.

2019 was also a year of change in the leadership of UNUCRIS. Prof. Dr. Madeleine Hosli returned to her home university in Leiden in the summer, while Prof. Dr. Luc Soete, former Director of UNU-MERIT and former Rector Magnificus of Maastricht University, took over as director ad interim until the end of the year. I would like to offer my sincere thanks to them both for their contribution to the institution. Finally, I would like to thank all our stakeholders for their continued support: UNU, under the leadership of Rector Dr. David Malone; the Flemish Government for its financial support; our two Flemish partner universities, Ghent University and the Vrije Universiteit Brussel; the Province of West-Flanders; the City of Bruges; the Universidad Andina - UASB; other funding agencies, policymakers and regionalism scholars with whom we collaborate all over the world.