Challenges and Opportunities for the UN Security Council - Bénédicte Frankinet 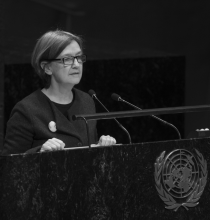 Former Permanent Representative of Belgium to the United Nations

UNU-CRIS is honored to welcome Bénédicte Frankinet to deliver a lecture entitled 'Challenges and Opportunities for the UN Security Council'. During her distinguished career Ms. Frankinet has served Belgium in numerous capacities across several continents, giving her an unparalleled insight into the workings at the highest level of government and international institutions.

Ms. Frankinet was the Permanent Representative of Belgium to the United Nations (2013-2016), before acting as Special Envoy for the Belgian Candidacy to the UN Security Council.

Other notable positions include as Counsellor, then Deputy Head of Mission, at the Belgian Embassy in Paris (1994-1999) and as First Secretary at Belgium’s Permanent Representation to the European Communities in Brussels (1988-1992).

In recognition of her service, Ms. Frankinet received the title of baroness in 2017. Since October 2018, she is chargé de mission in the secretariat of Queen Mathilde of Belgium.