He is the co-author and co-editor of various books, such as Euroscepticism as a Transnational and pan-European Phenomenon (Routledge, 2017); After Austerity (Oxford University Press, 2017); the Routledge Handbook of Euroscepticism (Routledge, 2018); Attitudes, Aspirations and Welfare (Palgrave, 2018); and Differentiated Integration and Disintegration in a Post-Brexit Era (Routledge, 2020). His articles have been published in journals such as Policy & Politics, the Journal of European Public Policy, the Journal of Common Market Studies, Politics, Comparative European Politics, and Social Policy & Administration. He is the co-founder and co-director of the UACES-funded Research Network on “Differentiated Integration in the European Union after Brexit”. 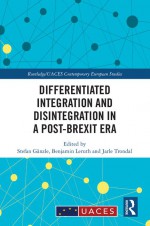 The Implications of Brexit for Relations between the EU, the UK and Australia