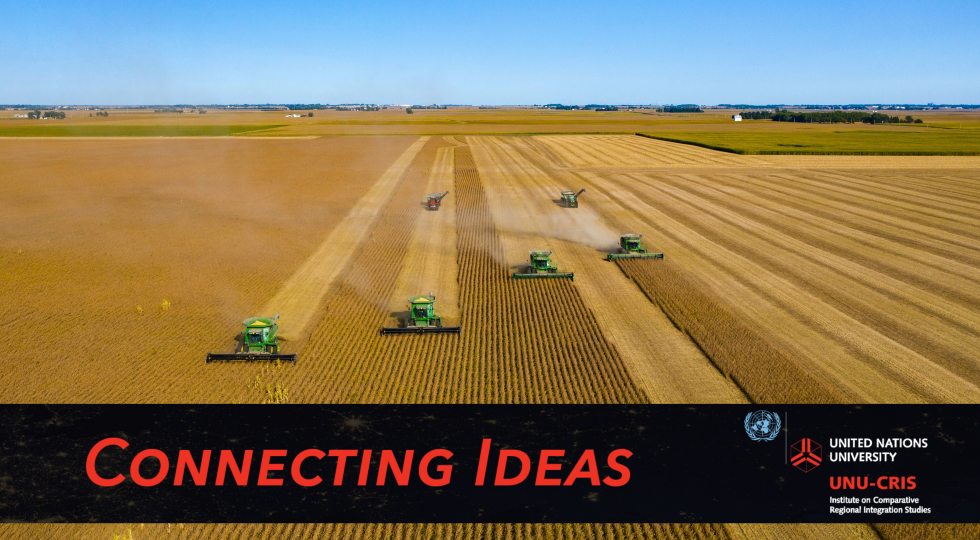 The Russian invasion of Ukraine started in the last week of February 2022 and its subsequent repercussions have thrown off balance a world that recently started tottering from a global pandemic. Despite triggering various backlashes, indignation and condemnations from the broader international community, Putin’s determination, timing, and manipulation of resources has shown once again that Russian pretensions are still very much alive. Historically, Russia has had a track record in capitalising upon its exports to undermine foreign decision-making – as Western Europe’s largest provider of both gas and oil, this posture has not changed in the latest conflict. However, this blog sheds light on another geopolitical entanglement: Brazil’s reliance on Russian fertilisers. First and foremost, to say that agriculture is a vital sector to the Brazilian economy would be an understatement. With about 25% of its GDP deriving from the agribusiness, the agricultural sector fuels both domestic industries and consumer markets as well as makes up 30% of all exports. There is, strikingly, an ironic fact: most of the Brazil’s soil has low fertility. For most of its history, Brazil’s agriculture was restricted to a few regions, and even fewer crops. It was only with advent of the Green Revolution of the 1960s when high-yield varieties of food grains (most notably soy and corn) were introduced into the country, prompting a boom in productivity. These varieties, however, when faced to the unbearing soils of the broader Brazilian backlands require massive amounts of chemical fertilisers to maintain their outputs. One could say such adoption eventually paid off, Brazil currently sits as the third largest country by agricultural yield, a crowning title that comes with a caveat - unlike agricultural powerhouses like the USA and China, Brazil needs to import 80% of its fertilisers including potash, nitrogen, or phosphates.

Being reliant on foreign markets for crucial inputs is already an undesired vulnerability for any country, and a volatility that has, almost overnight, become geopolitical. Russia is Brazil’s largest supplier of fertilisers. According to the Brazilian Ministry for Industry, Planning and Trade, as of 2021, about a quarter of all fertilisers imported came from Russia, both in value and tonnage. Even in the short months since, this trend continues just as strongly in the first three months of 2022, reaching record highs compared to previous periods. Belarus’ stake, albeit smaller, must also be factored “at risk” in Brazil’s fertiliser import pool, with about 3% of total value and 5% of total quantity in 2021, and unlike Russia, Belarusian had its fertiliser exports blocked by neighbouring countries since March. Much like with natural gas to Europe, the Kremlin is aware of the importance of its natural resources and knows how to use them for political leverage during times of conflict, dampening the resolve and policies of countries reliant on Russian inputs. A famous example is Germany, that imports about half of its natural gas from Russia, and oftentimes falls back on more resolute actions against Moscow. Only recently, German Chancellor Olaf Scholz became more adamant in deepening Germany’s role in the Ukrainian crisis, and even then, far more cautious than other Western European countries. While gas supply is subjected to winter seasonality in Europe, giving the bloc a few months of breathing room to adjust policies, Brazil’s demand for fertilisers is more consistent throughout the year. With two spikes in February/March and August/ September. While the former is already covered, the latter is of particular importance, given that it nourishes crops for the larger summer “mega-harvest”, mainly of soy and corn. Nonetheless, the Brazilian Agency of the Diffusion of Fertilisers estimates that the country’s storages might have enough chemical fertilisers to last until June. Hence, maintaining a steady supply of fertilisers until then will prove both critical and difficult, and an uneasy cooperation with Russia will remain a fundamental piece of that equation. Now here is where economics becomes tangled with geopolitics.

While President Jair Bolsonaro had no small share of polemic official visits in 2019, the COVID-19 pandemic naturally slowed down outbound presidential visits. It was an eyebrow-raising surprise that his first major presidential visit in 2022 would be nowhere less than Russia in mid-February, followed by an official visit to Hungary. While there was a heavy political undertone to these two visits, with Bolsonaro often associated with right-wing populist leaders like Orbán and Putin, the meeting in Moscow had an interesting item in its priorities: to discuss the supply of Russian fertilisers to Brazil. Truly, Brazil has adopted a rather peculiar official posture towards the Russia-Ukraine conflict. While it still sides with other countries of the United Nations General Assembly in voting to condemn the war, it is far less enthusiastic about condemning Russia openly. This posture is further exacerbated by Brazil currently occupying a seat in the United Nations Security Council. From all UNSC reunions touching on the humanitarian situation in Ukraine, headed by Brazilian ambassador Joao Genésio de Almeida Filho, Brazil has not accused Russia directly for the conflict. While there were remarks on the importance seeking a peaceful settlement of conflicts and condemnation of “violence”, most of the tenor of the official texts has been set around deploring the humanitarian disasters taking place across Ukraine, however not explicitly denouncing Russia or framing Putin as an aggressor. Curiously enough, an issue brought up by the ambassador was, in fact, “spillover effects in the entire world, especially through increased prices of oil, gas, grains and fertilizers, among others”, citing the threat of food insecurity arising not only in the region but throughout the developing world.

As a policy for international conflict mitigation, Brazil, traditionally advocates against embargoes, on the principle that they are too taxing on the embargoed country’s population, and such a posture will likely be used to justify Brazil’s non-involvement in sanctioning Russia. Besides, the issue of securing a seamless supply of fertilisers does appear to be a priority that Brazil is unwilling to sideline, and its dependence on Russian fertilisers is too critical to afford a confrontation with the Kremlin besides some vague “pleas for cessation of hostilities” in the UNSC. Additionally, unlike European countries, ever more sympathetic to Ukraine from the spill overs of a raging conflict nearby, Brazil does not seem pressured from a conflict half a world away, at least for the time being. On a few last notes, the crisis and rising fertiliser prices have encouraged Brazilian initiatives seeking to ramp up its fertiliser production in the past months, both private and state-driven, as well as fostering alternative streams from Canada and Iran. Such initiatives, nonetheless, will take time to mature, but hopefully they will slake the country’s deep dependence on imports to sustain its agriculture. Lastly, by no means Brazil-Russia relations are centred solely on fertiliser trade. While this article sought to discuss one facet that might be contributing to Brazil’s unwillingness to openly condemn the Kremlin, it is by no means the only defining factor.