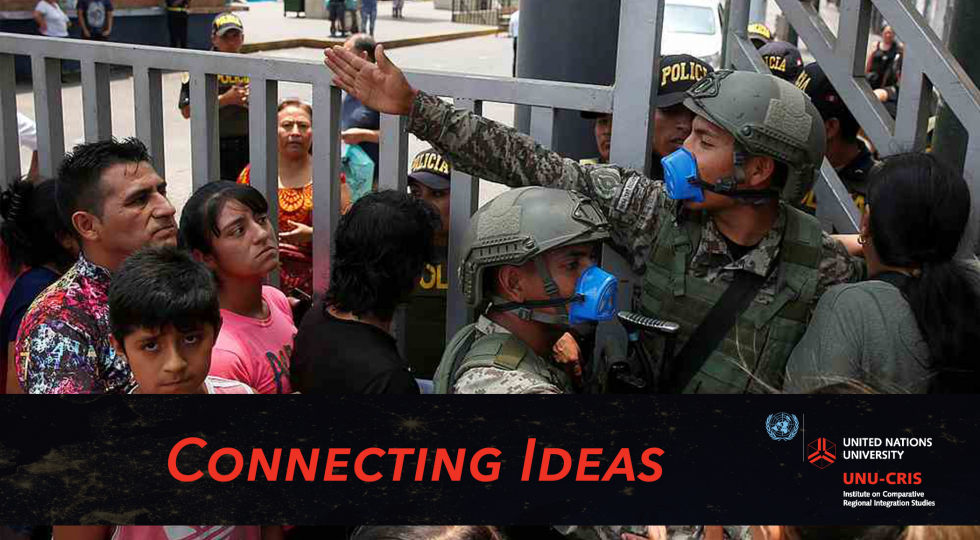 Data for this post builds on the research project ‘Regional Social Regulation in Latin America: A New Agenda for Development? Prospects and Challenges’ (SociAL-Reg), funded by the Spanish Ministry of Economy, Industry, and Competitiveness (CSO2015-66411-P). A previous version of this blog was published in Agenda Pública on 18 March 2020 (http://agendapublica.elpais.com/el-coronavirus-oportunidad-para-la-coope...).

At the beginning of this century, Latin America, and especially South America, turned to the left. The progressive governments that came to power, laxly labelled as the "new left," promoted policies that, beyond their variations among countries and specific moments in this progressive wave, sought to give the state the central role it had lost after years of neoliberalism, privatisation, and structural reforms. This role referred to economic, as well as, political and social policies. The social agenda then regained its relevance, through various domestic initiatives that sought to overcome years of social disinvestment and the resulting growing poverty and inequality affecting the region. These policies resonated at the regional level.

Thus, MERCOSUR, a project that fits very well within the wave of open regionalism, or new regionalism, and whose objective was to achieve a better insertion of these countries in an international context characterised by the economic and financial globalisation of the 1990s, was reformulated. As Lula da Silva and Néstor Kirchner came to power in Brazil and Argentina respectively, they launched the so-called Buenos Aires Consensus, which, moving away from the Washington axis, was to strengthen the political, productive and social agendas of the bloc. On this basis, MERCOSUR announced its first redistributive policy in 2004: the MERCOSUR Structural Convergence Fund (FOCEM) which was to promote structural convergence, competitive development and social cohesion within and between member countries. From a strictly social dimension, the Council of Ministers of Social Development was established in 2005, while the MERCOSUR Social Institute (ISM) was created in 2007 to provide technical assistance in the formulation of regional social policies and to develop a Strategic Social Action Plan to reduce poverty, redistribute wealth, promote social justice and regulate market institutions. However, cooperation in strictly social matters was not new in MERCOSUR. In fact, in the early 1990s, health, along with education, was already included in the bloc’s agenda.

Within MERCOSUR, health was already defined in the 1990s as a policy problem to be addressed at the regional level, and from a double perspective. On the one hand, health is defined in close relation to the harmonisation of policies and the elimination of those national regulations and norms that are contradictory or conflicting, especially in view of the creation of the common market. On the other hand, health stands out as a problem that requires the coordination of national sectoral policies at the level of MERCOSUR. Thus, the technical work of the first commission on ‘Health Products’, which was later deepened through Sub-Working Group 11 (SGT11), is complemented by the activities of the Meeting of Ministers of Health, created in 1995 with the objective of coordinating policies and implementing joint actions to promote, prevent and protect health. The two bodies have been working together for 28 years, and their joint regional action has resulted in more than 300 regional technical and political regulations. In addition to the production of norms, standards and regulations, it is worth noting the collaboration that has been built up over these years in everything related to health surveillance in border areas, epidemiological surveillance and health control, as well as health information and communication systems and strategies to prevent and control the transmission of diseases such as yellow fever, rubella, diphtheria, dengue, zika and chikungunya, many of which are far from the concerns of the countries of the North. In this respect, the Health Surveillance Commission (COVIGSAL) under the SGT 11, has been key in the control of priority diseases for MERCOSUR full and associated members. Based on the monthly mandatory reports by the members, COVIGSAL elaborates a joint analysis of the regional epidemiological situation and recommends courses of action to ministers. This streamlined mechanism of information exchange and preparedness plans proved to be useful and relevant during the 2009 H1N1 pandemic flu, as recognised by the World Health Organization.

Moreover, the activities of both the SGT11 and the Meeting of Ministers of Health, and their various committees and working groups, include the holding of meetings, many of them on a six-monthly basis. These successive meetings have become a space for socialisation and learning among officials, professionals, technicians and experts at different levels from both member and associate countries. These networks, in specific cases, have served to build capacities and articulate joint responses and strategies, such as for the joint purchase of medicines. In this sense, it is worth noting the speed with which MERCOSUR, through its Intergovernmental Commission on for Medicines Policies (CIPM), decided to resume the work agenda that UNASUR had been carrying out until then, and with which some coordination had been initiated.

Lately, analysts have pondered how and to what extent Latin America could benefit from the late arrival of the COVID-19 pandemic and take advantage of the experience of other countries, including European ones. Today, in the same way, Latin America has another opportunity: to take note of the difficulties that the European Union itself had in coordinating joint actions by its member countries, many of which had resorted to individual and, in some cases, unsupportive, ‘every man for himself’ strategies to deal with the pandemic.

MERCOSUR, like any regional process, recognises its lights and shadows. Currently, there are many uncertainties in the bloc, while some actors, such as the Andean Community, are promoting a more marked institutional articulation among the regional projects that remain in place. COVID-19 poses a threat to public health and is a clear and painful reminder of the importance of cooperation in managing cross-border challenges. In this context, the regional level, as a meso-level between the national and the international, appears as a key space when it comes to providing concerted responses to an issue in which national policies and decisions can be ineffective if they are not articulated with other actors operating at other levels. Some steps have already been taken in this direction: MERCOSUR has recently approved an emergency fund of US$16 million to strengthen a regional and coordinated response to COVID-19. Funded by the FOCEM, this fund will further strengthen the regional project ‘Research, Education and Biotechnologies applied to Health’ in place since 2011. Further regional actions include the purchase of equipment and protection materials, and kits for detecting the virus. Strengthening the testing capacity will help ascertain the degree of penetration of the epidemic into the population, which is of vital importance for health decision-making. This adds to the joint lines of action set by MERCOSUR on 19 March and which involve sharing information and statistics on the evolution of the pandemic and on the measures adopted by member countries, facilitating the return of citizens to their respective country of origin, and ensuring the movement of supplies and essentials (i.e. food, hygiene and health care products), among others.

COVID-19 poses, however, more than just an opportunity for cooperation in Latin America. It requires seeking regional responses to this global pandemic and thus deepening cooperation in health in a region that recognises important antecedents and achievements, including, among others, the Andean Health Organization (Convenio Hipólito Unanue) and the Pan American Health Organization. Clearly, this entails, as MERCOSUR has been doing since the 1990s, two key driving forces: political and technical cooperation. Moreover, MERCOSUR today brings together all countries in South America. Closer cooperation and joint instruments, guidelines and practices among full and associate members offer a window of opportunity for the enhancement of regional governance in health. This is essential to address the public health crisis and mitigate its economic and social consequences, and to prepare the region for future cross-border challenges.