The End of American World Order 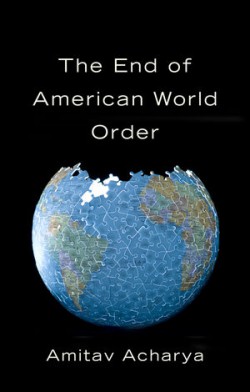 The age of Western hegemony is over. Whether or not America itself is declining, the post-war liberal world order underpinned by US military, economic and ideological primacy and supported by global institutions serving its power and purpose, is coming to an end. But what will take its place? A Chinese world order? A re-constituted form of American hegemony? A regionalized system of global cooperation, including major and emerging powers? In this timely and provocative book, Amitav Acharya offers an incisive answer to this fundamental question. While the US will remain a major force in world affairs, he argues that it has lost the ability to shape world order after its own interests and image. As a result, the US will be one of a number of anchors including emerging powers, regional forces, and a concert of the old and new powers shaping a new world order. Rejecting labels such as multipolar, apolar, or G-Zero, Acharya likens the emerging system to a multiplex theatre, offering a choice of plots (ideas), directors (power), and action (leadership) under one roof. Finally, he reflects on the policies that the US, emerging powers and regional actors must pursue to promote stability in this decentred but interdependent, multiplex world.