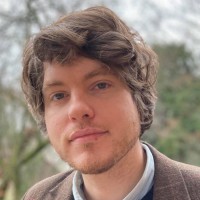 Eric’s areas of academic interest include public diplomacy, science diplomacy, the historical developments of diplomacy (with a particular focus on the Cold War), and the study of international relations conducted on the sub- and supranational levels by the ever-expanding constellation of non-state actors.

While at UNU-CRIS until July 2021, Eric will work under the supervision of Luk Van Langenhove in establishing a research unit on modern diplomacy. In this capacity, he will assist in setting up a webpage for the unit, contribute to the “Connecting Ideas” blog with some pieces related to modern diplomacy, organise bimonthly research seminars on relevant topics, and work on a couple of joint papers that address modern diplomacy issues. In addition to networking and participating in conferences, Eric will also be working on proposals for the European Research Council and a project on science diplomacy in the Middle-East.

The several years preceding, Eric has enjoyed a varied career in EU and international affairs. Most recently, he served the Government of Sweden as the aide to the Bilateral Ambassador and as an assistant coordinator for the Committee of Permanent Representatives. This followed other professional experiences, such as writing summaries of EU legislation for the Publications Office of the EU; researching questions related to international development and climate policy for the think-tank Friends of Europe; and serving as an advocacy officer on behalf of the disenfranchised and marginalised members of the Unrepresented Nations and Peoples Organisation. Eric has also assisted in teaching a course on the psychology of communications at the VUB and worked as a freelance editor for various clients including the World Bank.

Eric received a BA in History from the University of Sussex and an MSc in Communications from the VUB. His MSc thesis, entitled “Public diplomacy 2.0: A comparative Study of Russian and US Diplomatic Missions’ Use of Facebook”,  was recommended for publication for shedding light on the changes in communication strategies and published content in the wake of geopolitical upheavals, and for assessing the degree to which American and Russian diplomatic missions have adapted to the digital parameters of modern public diplomacy. Meanwhile, his slowly-progressing PhD proposal seeks to explore the role public diplomacy can play in forwarding nuclear non-proliferation.