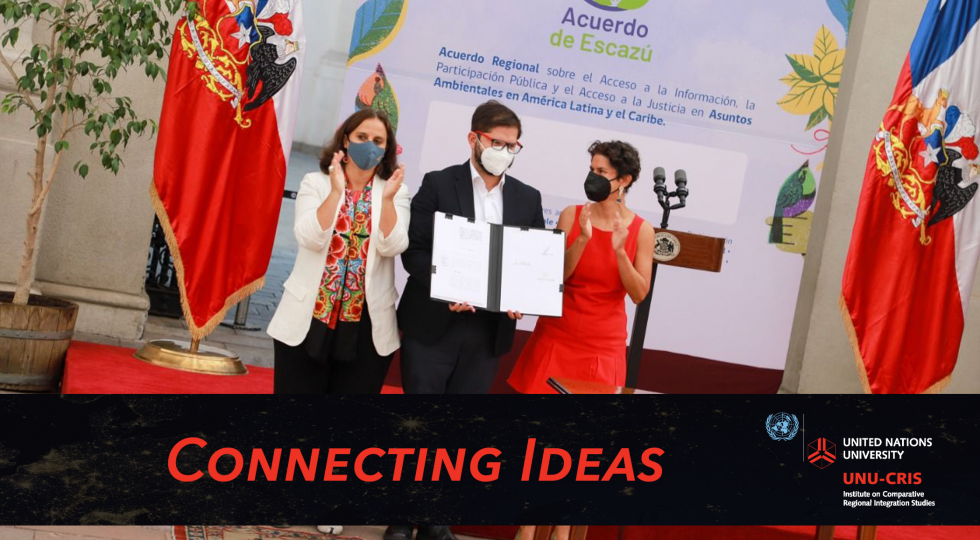 In 2012, Rio+20, the second United Nations Conference on Sustainable Development, took place in Rio de Janeiro, celebrating 20 years after the first edition in 1992. Debates were focused on implementing green economy and sustainable development. The final document, “Future We Want” was broadly considered a failure by the media for being “meaningless and weak”. Nevertheless, one binding treaty emerged from it, even if years later in 2021. The Escazu Agreement (full name being Regional Agreement on the Access to Information, Public Participation and Access to Justice in Environmental Matters in Latin America and Caribbean) is the first and only one designed by and for Latin America as a region in environmental issues. It has an unconventional take on climate action: it shifts the focus towards citizens by emphasising accountability and public participation in environmental decision agendas, including the protection of environmental activists. This article discusses the innovations that the Agreement brings to climate action as well as the role of political cycles and regional institutionalisation in Latin America.

In Latin America, the Rio+20 conference gave way to the Santiago Declaration, signed in 2014, which ignited a series of nine negotiations in three years that culminated in the signing of Escazu Agreement in September 2018. Up to now, the Escazu Agreement has been signed by 25 countries and ratified by 12 out of 33 countries in the region. It formally entered into force in April 2021 and its first meeting took place in April 2022. Its proposition is rooted in the 10th point of the Declaration of Rio 1992: “Environmental issues are best handled with the participation of all concerned citizens, at the relevant level.” To put this ambition into practice, the Agreement establishes three axes: access to environmental information, public participation, and access to justice.

The access to environmental information requires states to generate and disseminate awareness of the use and preservation of natural resources, including information on hazardous materials and contaminated zones. This information must be available in the language spoken by the local people in affected areas.

Public participation involves measures to guarantee the inclusion of the public in the decision-making process. It means creating norms for participation in national, regional and international forums, dissemination of information including non-technical language-, creation of dialogue spaces, appreciation of local knowledge, and special measures for the inclusion of vulnerable groups into these discussions.

Access to justice and protection of human right of environment activists is the third axis to be guaranteed by national laws. Additional clauses consider the creation of enabling national capacities to conform with the agreement, cooperation between parties and information exchange. It also ensures measures to protect the life, personal integrity, freedom of opinion and expression, of human rights defenders in environmental matters.

This last axis might be the most symptomatic for the design of the Escazu Agreement. Many studies highlight that environmental and climate activists are exposed to particularly high risks in Latin America. Tierra de Resistentes, an initiative created by journalists, has documented 2.200 acts of violence against activists in the region, half of them in Brazil. Global Witness reports also find that half of global killings occurred in two countries: Colombia and the Philippines.

The most strategic area for the Escazu Agreement to come into place, the Amazon Forest, is still at stake. The recent disappearance and murder of journalist Dom Phillips and the indigenist Bruno Pereira have international attention to aggression in the region. It is thus evident that the actual enforcement of the Treaty will remain a big challenge. Of the Amazon countries, only Bolivia and Ecuador have ratified the Treaty, while the other states remain signatories only. The Treaty lists a series of laws to be created, but how they will be redacted and how public participation will take place concretely is up to each one of the member states to decide. The only centralised mechanism foreseen for vigilance is the Committee to Support Implementation and Compliance and Conferences of the Parties, which was launched in April 2022 in Santiago de Chile, while the settlement of disputes includes submission to the International Court of Justice.

Being a sensitive topic in the region, environmental rights will continue to be at risk. Peru voted against the ratification in 2020 and a political crisis since 2021 has put the topic at the end list of priorities in the country. In Brazil, which holds the biggest territory of the Amazon Forest, the government of Jair Bolsonaro set a record for the size of deforestation of the biome - not only the Amazon biome, but also the Cerrado, the most biodiverse savannah biome. His main competitor in this year’s elections, Lula da Silva, has already compromised with demarcation of indigenous lands but hasn’t pronounced himself on the Escazu Agreement.

In other countries, political shifts have already given a push to the Agreement. Colombia, another Amazon country, has not ratified the Agreement under the previous government, while the recently elected Gustavo Petro declares to be in favour. Another example is Chile, which was the main negotiator for the Treaty under the government of Michele Bachelet. With the election of Sebastian Piñera in 2018, Chile’s executive administration became the only state coming forward stating publicly they would not sign it. In a new twist, Chile signed it in March 2022, when the new government of Gabriel Boric took office.

The instability generated by government changes indicates that ratification might not be enough for the enforcement of the Treaty, as political shifts can not only accelerate but also stall the implementation process. In order to make the Agreement sustainable beyond political cycles, regional governance will thus be crucial. The United Nations Economic Commission for Latin America and the Caribbean (CEPAL) has taken up the task of institutionalisation by acting as a secretary for the agreement. Conversely, this task is also giving a new life to CEPAL, which is primarily known for its work on developmentalism and industrialisation in Latin America. The organisation has taken a new direction since the 2000s by promoting sustainable development and gradually reshaping itself as a platform for governance and regional coordination in a broad range of topics, including gender, social development, health, and natural resources. Positioning itself as a leader in the field of climate change allows CEPAL to position itself as a crucial organisation for the region, thereby filling the gap left by the other regional organisations such as UNASUR, which have been undermined by their members in recent years. The Escazu Agreement is therefore not only a bearer of hope for climate governance but also indicates a way forward for regionalism in Latin America.