The EU and China: Sanctions, Signals, and Interests 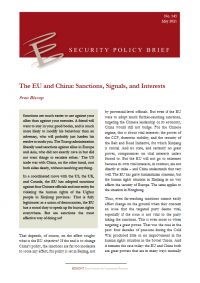 Sanctions are much easier to use against your allies than against your enemies. A friend will want to stay in your good books, and is much more likely to modify his behaviour than an adversary, who will probably just harden his resolve to outdo you. The Trump administration liberally used sanctions against allies in Europe and Asia, who did not exactly cave in but did not want things to escalate either. The US trade war with China, on the other hand, cost both sides dearly, without resolving anything.

In a coordinated move with the US, the UK, and Canada, the EU has adopted sanctions against four Chinese officials and one entity for violating the human rights of the Uighur people in Xinjiang province. That is fully legitimate: as a union of democracies, the EU has a moral duty to speak up for human rights everywhere. But are sanctions the most effective way of doing so?