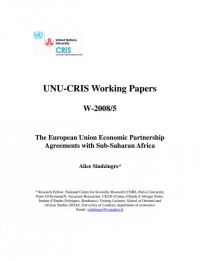 This paper analyses the impacts of Economic Partnership Agreements (EPAs) between the ACP (African, Caribbean and Pacific) countries and those of the EU (European Union) in the specific case of Sub-Saharan Africa (SSA). In order to comply with WTO (World Trade Organisation) requirements, the EPAs shift the trade preferences previously enjoyed by the ACP countries to a free trade regime between the EU and regional groupings of ACP countries. EPAs were supposed to fully enter into force at the end of 2007, but many ACP SSA countries have not been ready or have been reluctant to implement them at that date. EPAs are examined in their different contexts, in particular the theoretical underpinnings of trade liberalisation and regionalism respectively, as well as the increasing number of regional arrangements aiming at ‘deep’ regional integration in all parts of the world, which ensued from the disappointment with multilateralism of many developed and developing countries. EPAs are then investigated in the specific context of SSA, i.e. that of a distorted trade structure, an excessive dependence on commodity exports, fragile industrial bases, as well as by a disputed effectiveness of its many intra-SSA regional agreements. EPAs co-exist with other North-South preferential trade agreements, in particular the EU GSP (Generalised System of Preferences), including the EBA (Everything But Arms) initiative, and the US AGOA (African Growth and Opportunity Act). It is shown that EPAs will have very different outcomes depending on countries and their particular initial conditions, economic structures and regional context. It is also revealed that these outcomes depend on many variables: global factors, international prices, domestic market structures, trade policies conducted by the EU, the governments and various trade agreements to which they belong. EPA outcomes are therefore uncertain and can be assessed only on a case by case basis, at the level of countries, sectors and products. In addition, many impact assessments rely on simulations, which cannot be considered as ‘hard facts’. EPAs may have beneficial effects on SSA countries and enhance their exports and competiveness. They may constitute a mode of integration that is more efficient than multilateral liberalisation, and in fine may be a more manageable step towards multilateralisation, especially in poor countries. However, EPAs exhibit several risks, e.g. diverting trade, augmenting the complexity of the already complex ‘spaghetti bowl’ of trade arrangements, creating fiscal losses in countries that suffer from narrow fiscal bases and rely on trade taxes, eroding the existing industrial bases - which are fragile, threatened by more competitive developing countries, especially China, and often depend on the previous EU unilateral preferences –, and benefiting EU firms more than those of SSA. EPAs have the ambition to foster trade, improve regional relationships, deepen north-south integration and enhance development. These are numerous objectives, and moreover countries may strongly differ: they can be reached if EPAs help countries to reinforce their capacity to conduct their policies – the ‘policy space’ -, control the effects of trade diversion and displacements of industrial activities that often accompany free trade agreements, and strengthen their industrial sectors, as high-growth Asian countries. 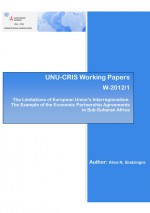 The Limitations of European Union's Interregionalism: The Example of the Economic Partnership ... 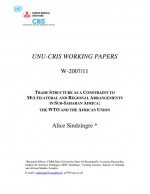 Trade Structure as a Constraint to Multilateral and Regional Arrangements in Sub-Saharan ...