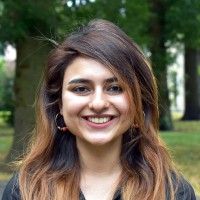 Hira Kahn was an Erasmus Mundus scholar who obtained her Master’s Degree in Economics of Globalisation and European Integration from a consortium of nine universities, including Vrije Universiteit Brussel. She was fully funded for her Erasmus Mundus Joint Master’s Degree programme with a scholarship from the European Commission.

Originally from Pakistan, she holds a Bachelor’s Degree in Economics with the President’s gold medal for ranking first in class. Hira is passionate about economic policy, political economy and global macroeconomic affairs. Due to her keen interest in the consequences of rising globalisation on the economic power and policy of states and regional blocks, she was doing her Master’s dissertation on the effects of regional integration and the function of regions on the welfare role of the states.  Alongside her focus on economic policy, Hira is also driven towards the UN global goals of prosperity for all and reduced inequalities.

At UNU-CRIS, she conducted her research on regional economic integration and its impact on the scope of government expenditure and redistribution policy of the states under the supervision of Glenn Rayp and Peter Claeys until the end of September 2018.