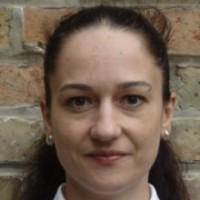 Katarzyna Czerewacz-Filipowicz, PhD has been awarded the degree of Master of Economic Sciences at University of Bialystok (Poland), title of Master’s dissertation: “The Politics of Polish International Trade in the years 1990-1997 in the Light of European Integration”. She has been awarded the academic degree of Doctor of Political Sciences at the Institute of International Economic Relations (International Economics), Department of Social Science, Wroclaw University, title of doctoral dissertation:  “The Scope and Character of Integration processes within the Confines of NAFTA”. She worked at the Department of Economic and Social Sciences at Bialystok University of Technology, where she taught the students of the following fields: political sciences, management, logistics within the scope of international regional integration, international relations, and international economic relations.

In 2012 Katarzyna Czerewacz-Filipowicz became the manager of Research grant no. 2011/03/B/HS4/05930 funded by Polish National Science Centre entitled „Economic consequences of regional integration processes in the area of the Commonwealth of Independent States.” She is the author of over 40 academic publications in the form of monographs, chapters in monographs, and articles published in Poland, Russia, Greece, the USA, the UK, Germany, Hong Kong, and Chile. Katarzyna Czerewacz-Filipowicz’s academic interests revolve around characteristic features of international economic integration processes, their premises, causes and specifics. Both the post-Soviet area itself and the integration groups in existence therein (such as the Eurasian Economic Community and the Commonwealth of Independent States) are within the main area of focus.

At UNU-CRIS, Katarzyna worked under academic supervision of Professor De Lombaerde doing research on the impact of the integration processes taking place within the Eurasian Economic Community on the economies of its member states.