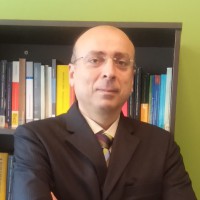 Dr. Kutluhan Bozkurt  was a virtual Visiting Research Fellow from 1 December 2020 until 28 February 2021. In this capacity, he drafted a paper on the EU-Turkey trade regime.

Assoc. Prof. Dr. Kutluhan Bozkurt, LL. M. Eur. (Munich) graduated from Marmara University Faculty of Law, Istanbul, in 1990. He was appointed as an attorney-at- law in Istanbul and later on as a judge in several cities between 1991 and 1999. He completed his PhD studies in the field of the EU law and International law between February 2000 and June 2004 at the Vienna University Faculty of Law, Austria. Within this period, he acquired a master’s degree in the field of European and International Business Law (LL.M. Eur.) at Munich Ludwig Maximilians University, Faculty of Law, Germany. His LL. M. thesis was on “Implementation of the Electronic Signature Directive in Turkey (Umsetzung Der Richtlinie über Die Elektronische Signatur in Der Türkei)” and was published as a book. His PhD thesis was on Turkey's relations with the EU, legal processes, and legal influences (Die Beziehungen der Türkei zur EU, rechtliche Prozesse und rechtliche Einflüsse) which was published online by the law faculty of Vienna University.

During his PhD, he did his legal and official internship in the different district courts of Vienna Supreme Court. Later, he made postdoctoral research at UNU-CRIS, Bruges/Belgium between October 2006 and March 2007. Since 2017 he has been working as academician at Yeditepe University Istanbul and at CIU in Nicosia and in 2018, he wrote associate professorship (habilitation) thesis on “Immigration Law, Refugee Status and Asylum within the Scope of European Union Policies and Regulations” and then had Assoc. Prof. Dr. title form Inter-Universities Council in 2019.