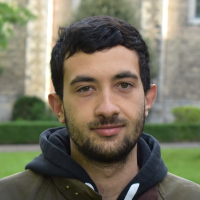 Luca Menghini was enrolled in the two-year Master programme in European Studies at LUISS Guido Carli, Italy, and completed an Exchange at Universidad Argentina de Empresa in Buenos Aires. He holds a Bachelor’s Degree in Politics, Philosophy and Economics and his Bachelor's thesis was entitled “COLOMBIA: FARC, the issue of land and the Peace Agreement”.

In previous years he has done several internships: in the international department of Banca Popolare di Sondrio, dealing mainly with exports and correspondent banking, at the International Association of European studies, participating at the organisation of Conference and seminars on the European Union, at the Italian Navy, as a political advisor during the annual joint exercise “Open Sea” 2018, and at the Italian Consulate General in Paris as communication Intern.

During his academic years, he has developed a strong interest for international organizations and their role in the international sphere, focussing mainly on the European Union and MERCOSUR. He is also committed to the environmental questions and in understanding policy that leads to a sustainable economy. At UNU-CRIS he worked on access to information on environmental matters and how their disclosure has an influence on policy-making.

At UNU-CRIS Luca Menghini worked under the research programme “The United Nations and Regional Public Goods” under the supervision of Glenn Rayp, Andrew Dunn and Madeleine Hosli until the end of May 2019.