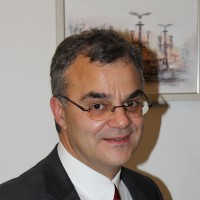 Dr. Mario Apostolov is a Visiting Research Fellow at UNU-CRIS since 1 November 2020. Mario Apostolov is Regional Adviser at the UN Economic Commission for Europe, providing support to the transition economies in trade facilitation and electronic business, and he coordinates at UNECE the United Nations Special Programme for the Economies of Central Asia (SPECA). He has also supported other cooperation networks in Southeast Europe, the Black Sea and other UNECE sub-regions. He has expertise in trade facilitation reforms, national trade facilitation bodies, the Single Window concept for export and import clearance, digitalization of trade information flows, and regional trade integration.

He holds an MA degree in International relations from the Moscow State Institute of International Relations and a PhD from the Graduate Institute of International and Development Studies at the University of Geneva. He teaches a course on the Dynamics of Regional Cooperation and Diplomacy at the International University in Geneva. He has published books with Routledge, Ashgate and the United Nations in such diverse areas as trade facilitation, regional integration, and the geopolitics of Christian-Muslim relations (a topic on which he did a post-doctoral project and published a book on the Christian-Muslim Frontier: A zone of contact, conflict or cooperation (Routledge, 2004).