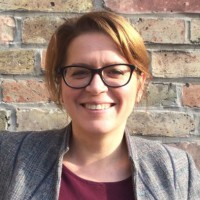 Marta Lenartowicz was a Visiting Researcher at UNU-CRIS and a Postdoctoral Fellow at Vrije Universiteit Brussel (VUB) in the Evolution, Complexity and Cognition research group (ECCO, CLEA). Before that, she was the Managing Director of the Global Brain Institute at VUB, an Assistant Professor at the Jagiellonian University in Krakow, the R&D Director and the Vice-President of an organisational development certification network “Advisio” in Poland, and the founding Director of the lifelong learning centre of the Jagiellonian University in Krakow. While in these positions, she has led or participated in 24 hands-on projects in the domains of public policy design, community development, organisational development, R&D, education, and outreach.

Dr. Lenartowicz graduated summa cum laude with a PhD in humanistic management (public affairs) in 2014, and she received an Master’s Degree in philology (theory of language) in 2001, both from the Jagiellonian University in Krakow. For her PhD, she developed a socio-cybernetic framework for understanding the resistance to change encountered by public policy interventions, and she has applied this framework to studying traditional Polish academic institutions’ responses to the policies introduced under the umbrella of the EU’s Lisbon Strategy. In her research at ECCO-CLEA, VUB, Dr. Lenartowicz seeks to devise a conceptual and methodological base for computational (i) profiling of social systems’ identities, patterns, and worldviews, and (ii) tracking of the dynamics of inter-systems interventions (metasystem transitions, autotransformations, perturbations, compensations, and backlashes). The resulting method applied to a wide range of political, cultural, economic, socio-technological, and functional social systems as it approached social systems generically as complex, adaptive, individuating patterns of communication.

In her engagement as a Visiting Researcher at UNU-CRIS, Dr. Lenartowicz collaborated with Professor Luk Van Langenhove to devise an inventory to guide observation of integrative interventions performed by one social system on another (e.g. in public policy, developmental aid, peace keeping, and diplomacy). The inventory will instruct monitoring and evaluation of such interventions, guiding qualitative study (and eventually, a computational analysis as well) of discursive practices which forge, sustain, and disrupt patterns of the systems in interest. To that end, the research will draw on the positioning theory of discursive practice developed by Rom Harré, Luk Van Langenhove and others, making a case for—and practically operationalising—a third-order positioning of monitoring and evaluation of social systems integration.