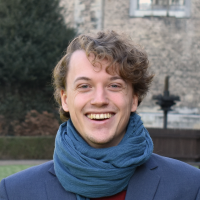 Michaël Lantmeeters holds a Master's Degree in International Relations from the Paul H. Nitze School of Advanced International Studies at Johns Hopkins University, where he focussed on international economics and global theory and history. During his studies, he focussed on expanding his academic knowledge and developed a profound interest in the political developments in East Asia. In line with these newfound interests, he did an independent study on how contemporary Chinese Foreign Policy behaviour follows the normative patterns of the ‘liberal world order’ or an alternative ‘Chinese world order’ (Tianxia System).

Before his time at SAIS Johns Hopkins University, Michaël obtained his Bachelor's and Master's Degree in Political Science at the Vrije Universiteit Brussel. As an Erasmus student, he also attended the University of Copenhagen in Denmark for a semester. As a result of the stimulating academic environment there, he awakened an interest in European integration issues, developing this further by focussing his Master’s Degree on European issues. To bolster his European credentials, he attended classes at the University of Kent’s Brussels School of International Studies and did an internship at the office of Member of the European Parliament Hilde Vautmans. His final Master thesis was an analysis of European integration in Justice and Home Affairs, using the theoretical framework of neo-functionalism.

At UNU-CRIS Michaël worked on both his interests in Europe and East Asia and combined them whenever possible. He worked under the research programme ”The Changing Patterns of Regional and Global Governance” under the supervision of Madeleine Hosli until the end of July 2019. 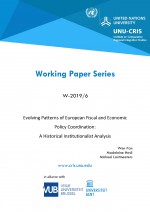 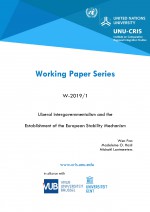 Liberal Intergovernmentalism and the Establishment of the European Stability Mechanism