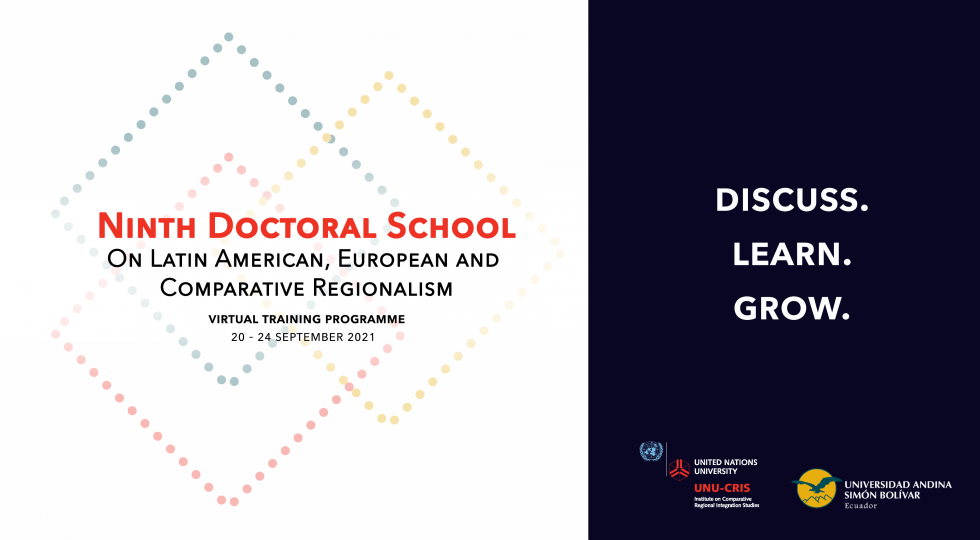 Bringing together PhD students and other promising young researchers, the Ninth Doctoral School, organised by UNU-CRIS and the Universidad Andina Simón Bolívar Sede Ecuador, will deliver a series of lectures by leading academics in the field of Latin American, European and Comparative Regionalism, and afford the next generation of researchers the opportunity to discuss and develop their research projects in tutorial sessions.

Taking place virtually from 20-24 September 2021, the Doctoral School will benefit doctoral students and other early-career researchers from across the social science spectrum, in various stages of their research projects, seeking answers to questions within the framework of Latin American, European or Comparative Regionalism.

The Doctoral School seeks to establish a network of researchers dealing with regionalism, based at universities across Latin America and beyond.

"The comparative perspective offered by school gave me an excellent opportunity to move beyond one region (or one organization) and to discuss the implications of similar processes in different parts of the world. Given that I also teach Latin American studies, these insights were precious."

- alumni of the Doctoral School

Applications are accepted on a rolling, first-come first-served basis until one week prior to the commencement date. When the capped number of participant positions are filled, no more applications will be accepted, however strong applications after the cutoff has been reached will be placed on a waiting list and contacted should positions become available.

The programme is bi-lingual and will be conducted in English and Spanish, and as such participants are expected to have a good command of both languages.

Applications (in English or Spanish) must include:

The fee is US$60 and must be paid at least one week prior to the commencement of the course.

Participants will be awarded a joint certificate from UNU-CRIS and the UASB.

Less than 7 days before commencement date: 100% of fee lost

Professor in Peace and Development Research at the School of Global Studies (SGS), University of Gothenburg

Postdoctoral Fellow at the Institute of Human Rights and Businesses, University of Monterrey

Professor of Public International Law and Foreign Trade, University of the Republic

More to be announced shortly.