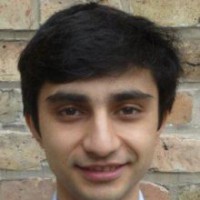 Numan Qardash is a graduate student in the Institute of European, Russian and Eurasian Studies (EURUS) at Carleton University in Ottawa. He studied law in Tashkent State Institute of Law and received his Honors Bachelor’s Degree in Political Science from the University of Ottawa.

Numan Qardash worked as a research assistant in the Centre for European Studies in Carleton University where he investigated the foreign policy of the European Union toward Central Asia and published an article on the EU strategy for the region. His research interests include ethnic conflicts, democratisation and regionalism in post-Soviet Central Asia and Afghanistan. Numan Qardash is fluent in Uzbek (his mother tongue), English, Dari (Farsi) and Russian.

During his internship of two months at UNU-CRIS, Numan Qardash was involved in a research project dealing with Russia’s changing role in the economy of the CIS countries, particularly focussing on Central Asian states. He was also engaged in expanding the RIKS platform of UNU-CRIS.