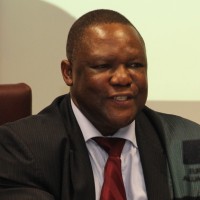 Dr. Obadiah Mailafia was an Associate Research Fellow at UNU-CRIS until the end of December 2016.

He is a socio-economist and policy analyst with experience in international development, banking and finance. He is Chef de Cabinet of the SG of the African, Caribbean and Pacific (ACP) Group of States based in Brussels, Belgium. Dr. Mailafia began his career as a university academic in Nigeria and in the UK. He then joined the African Development Bank Group, serving in Abidjan, Cote d’Ivoire and in Tunisia. He worked as a research economist and as Chief Economist in the Planning and Budgeting Department.

During 2005—2006 Dr. Mailafia was Deputy Governor of the Central Bank of Nigeria (CBN) with responsibility for monetary policy, foreign exchange operations, investment management, research, statistics, and cooperation with international institutions. After leaving the Central Bank, he was appointed Special Adviser to the President of the Federal Republic of Nigeria on Economic and Policy Matters, being, at the same time, a member of the National Economic Management Team (NEMT). Dr. Mailafia has also been consultant for UNDP, DFID, and Nasarawa State of Nigeria.

Oadiah Mailafia is a Bachelor’s Degree Social Sciences honours graduate of Ahmadu Bello University, Zaria, Nigeria. He is also an Economics graduate of the former Institut international d’administration publique of Paris (now ENA). Dr. Mailafia completed a PhD at the University of Oxford, specialising in International Economics and Development in 1995.

Dr. Mailafia has several publications in the fields of international economic relations, monetary economics, finance and macroeconomic policy, notable among them his book, Europe and Economic Reform in Africa (Routledge 1997). His current research interests are in the areas of regional monetary integration, international monetary cooperation, global governance reform, international trade (ACP/WTO) and the dialogue of civilisations in international relations.