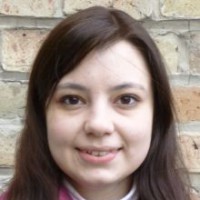 Olena Myrna is an economist by education (MA of Economics, Vistula University, Poland). However, her field of scientific interest is an interdisciplinary one, such as sustainable development of the Chernobyl Zone and affected region. She was a member of the team, formed around the 'Chernobyl-Tour' project, which, on the one hand, organises trips to the Chernobyl Zone, and, on the other hand, strives to transform the existing Chernobyl 'alienation/exclusion' zone into a place of international ecological and radiation education, possibly into the Chernobyl National Park and a World Heritage site.

She participated in the Volunteers for Chernobyl programme organised by UNDP, where she worked under the research project “Strategic marketing development of the Chernobyl affected territories” as a result of practical work on the field. Olena presented her findings at several important Ukrainian students’ and young scientists’ conferences in the fields of environmental economics, international tourism and management. Her project of Chernobyl National Memorial Park became a laureate of the Ukrainian competition “Modern Intellect of Ukraine”.

Olena Myrna worked on the project ‘Sustainability of regional integration’ under the supervision of Professor Bernard Mazijn for several months.