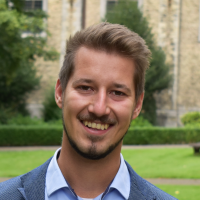 Philipp graduated in the research Master's programme “Modern History and International Relations” at the University of Groningen. He obtained a Bachelor's Degree from the University of Erfurt in International Relations and Economic Sciences. During his undergraduate studies, Philipp had the possibility to pursue two internships at institutions of his home federal state, which gave him the opportunity to work in the state’s representation to the EU in Brussels, as well as at the local ministry of economics. These experiences ultimately lead to his interest in regionalism of various scales and overlapping forms.

Between his studies, Philipp spent a year working in the finance sector. At the University of Groningen, he is now a member of the Programme Committee of his Master’s and will serve as president of Synthesis, an interdisciplinary study association upon his return following his internship at UNU-CRIS. Moreover, Philipp works as a research assistant at the university. His interests include competing and supplementing forms of regionalism, questions of agency, the contestation of the nation-state as well as paradiplomacy.

At UNU-CRIS, Philipp followed the track of “The Role of Regions in Global Governance”, with a specific focus on paradiplomacy. He was supervised by Luc Soete and Andrew Dunn. 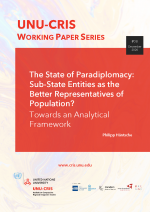 The State of Paradiplomacy: Sub-State Entities as the Better Representatives of Population? ... 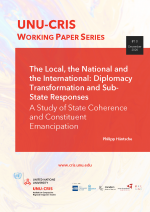 The Local, the National and the International: Diplomacy Transformation and SubState Responses ...