From 2001 till 2003, he was principal adviser at the European Commission in the DG Home Affairs in charge of drafting proposals for directives on immigration. He also works as an expert and trainer for different institutions (European Parliament, UNHCR, IOM, ICMPD,…) and is at the origin of the European Asylum Curriculum (EAC) used by the EU to train asylum case officers. After having published extensively on issues of constitutional and administrative law as Head of the Centre for Public Law in ULB till 1999, his several books and articles now focus on Immigration and Asylum Law with a special emphasis on its EU dimension.

From 2012 to 2016, he was the Deputy Director of the Migration Policy Centre (MPC) at the European University Institute in Firenze, Italy. 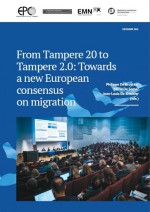