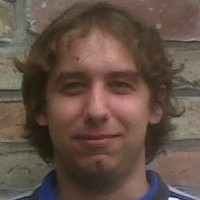 Raf Van Bulck obtained a Bachelor’s Degree in Economic Sciences from Ghent University. During his internship, he was finishing his Master’s Degree.