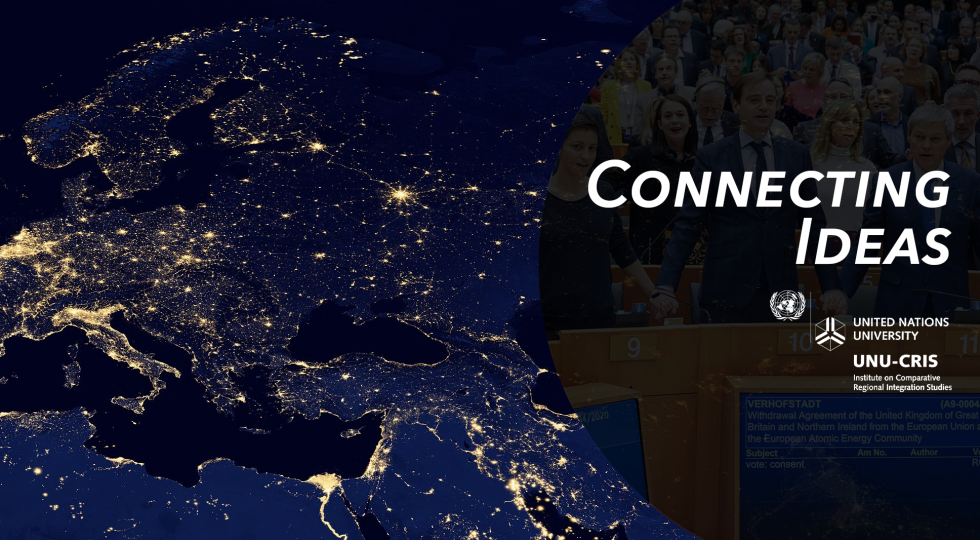 Allow me to start the first blog of the year in our Connecting Ideas series by wishing our readers a happy and healthy 2020!

The world of regions is dynamic, and 2020 is unlikely to be an exception to the rule. Regional actors and organisations have taken a flying start of the year in January: this month marked the start of the newly established cooperation between the Mekong River Commission Secretariat, based in Vientiane (Lao PDR), and the Lancang-Mekong Water Resources Cooperation Center; on the 15th the National Stakeholders’ Consultations for drafting the East African Community Political Confederation Constitution took off in Ngozi, Burundi; on the 15th the European Parliament adopted a resolution on the Conference on the Future of Europe, which should start in May; the ASEAN Caucus on ASEAN-EU Comprehensive Air Transport Agreement (CATA) was held in Jakarta on the 16th (being the first ever region-to-region agreement of its kind negotiated); also on the 16th new judges took office in the Andean Tribunal of Justice in Quito (Ecuador); the 33rd African Union Summit, under the theme "Silencing the guns: creating conducive conditions for Africa's development", was opened on the 21st in Addis Ababa with the conference of the Permanent Representatives’ Committee, and there is, of course, Brexit, taking effect on this very day.

While there is continuity in the operations in most regional organisations and new regional policy initiatives are in the pipeline in various policy areas, it is also true that a number of institutionalised supranational regions are in a process of redefinition, recomposition, and, one could say, being questioned: not only is there Brexit in Europe, but regionalisms in South America, Eurasia and Africa are also undergoing transformations. While some of the existing constructs are questioned (in their performance or even in their very existence), citizens feel – at the same time – that many of the policy challenges that they are facing (related to climate, people mobility, public health, the economy, etc.) cannot be adequately tackled at the local or national levels, and acknowledge the need for regional coordination and action.

In many places the world over, these supranational dynamics are simultaneous with subnational dynamics: subnational regions and city-regions are becoming increasingly self-confident in seeking more policy autonomy to tackle issues of direct concern to their citizens, and to become international actors. Often this happens within the established constitutional context, sometimes (more or less radical) constitutional reform is advocated. Citizens thereby understand that better local and (sub-national) regional policies are not necessarily incompatible with better (supra-national) policies.

UNU-CRIS, in its research, does not promote any particular political or constitutional construction or distributional choice concerning policymaking competencies across levels. The task of UNU-CRIS is to contribute to mapping and understanding the dynamics of regional integration and disintegration processes, to identify regional governance gaps to tackle pressing problems faced by citizens in a number of policy areas (migration, public health, economy, security, and so on), to analyse which public goods are best supplied at the regional level, to identify best practices as to regional policies, and to better come to grips with the connections between supra- and sub-national regionalisms.

UNU-CRIS will further develop its strategic plan (2017-2021) in the coming year and materialise it through several research projects and advisory and capacity building activities. Following a mid-term assessment, however, there will be some gradual refocusing which will be announced soon.

Some of the highlights to look forward to for UNU-CRIS in 2020 include the EUIA Conference, our Second Summer School, and the 9th doctoral school on Comparative Regionalism in Quito.

UNU-CRIS will soon bring on new researchers and interns, and draw new visiting researchers at the forefronts of their fields to Bruges. Keep an eye on the vacancies that will be published on our website or in our newsletter, there may be something of interest to you!

A comprehensive text book was just published on the Changing Global Order in our UNU Series on Regionalism (with Springer), edited by Prof. Hosli and Mr. Selleslaghs, and there are other volumes in the pipeline, including one on regional migration governance (edited by Professors Marchand, Rayp, and Ruyssen) and one on Brazilian foreign policy in a regional and global context (edited by Professors Vigevani and Ramanzini).

It is our intention to develop the Connecting Ideas blog further and turn it into an (even more) lively forum for exchanges of ideas related to the (supra- and sub-) national regional governance levels: mapping and commenting new developments in the world of regions, as well as their interactions with states, (other) regions, and international organisations; identifying regional governance needs; assessing regional policies, and so on. All members of the wider UNU-CRIS family and, more broadly, all members of the global community of regionalism scholars and practitioners are warmly invited to contribute to our blog series and interact with their counterparts. This platform provides the chance to share beyond the usual spheres we operate in, reaching a greater audience and connecting ideas as far and wide as possible.

We particularly welcome short pieces (between 600 and 800 words) that add value to the debates by providing conceptual clarity on often complex questions, original and creative perspectives, and/or discuss empirical evidence on a particular topic. We especially welcome contributions that shed light and inform our readers about the dynamics of regionalism in various parts of the world, including by adopting a comparative perspective.

Please mail your ideas or draft blogs to adunn@cris.unu.edu. You will receive a swift reply.

What I’ve shared above is just a taste of 2020 at UNU-CRIS. Stay tuned, and I’m looking forward to working with you!