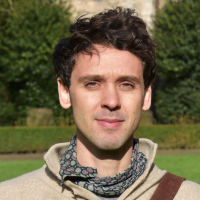 Ruben David is a PhD student at the School of International Studies at the University of Trento. His research analyses the role both the EU and China have played in shaping the global climate regime beyond their borders, in the context of UN multilateral cooperation. The project focuses on the normative structures of the UN climate regime, exploring the process by which norms of international climate governance have diffused and evolved over time. The study aims to understand how the EU and China have positioned themselves within normative debates on climate change revolving around the “cleavage” between ‘developed – developing’ countries.

He has both a BA and an MA in European and International Studies from the University of Trento. He earned a diploma in Transnational Governance from the Sant’Anna School of Advanced Studies in Pisa, during which he spent a semester at the Pontifical Catholic University of Rio de Janeiro in Brazil investigating the favelas pacification process. He holds a Master in Diplomacy from SIOI (Rome). He has interned at the Italian Permanent Mission to the UN (Vienna) and at the UNRWA Representative Office to the EU.

At UNU-CRIS, he conducted research on the European Union’s foreign climate policy under the supervision of Professor Simon Schunz, UNU-CRIS Associate Research Fellow.