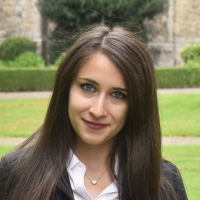 Silvia Alessi pursued a Master's Degree in International Relations at Queen Mary University of London. She obtained her Bachelor’s Degree from the University of Catania, where she had the opportunity to spend a semester abroad at the University of Salford and was selected for a European project on migration policies, awarded a Special Mention by the Council of Europe. Her thesis was about the European external action in the Western Balkans, with a focus on the EULEX case in Kosovo. In 2016, she co-founded a youth-led association committed to the requalification of local territory and charity activities. During the summer, she interned at the German Institute on International and Security Affairs in Berlin, researching EU elections and reforms within the AFSJ framework. Moreover, she participated in UN-related activities such as CWMUN and a UNHCR course on asylum legislation, which played a significant role in shaping her interest in the work of the United Nations. Her interests range from the advocacy and development sector to international cooperation and diplomacy.

At UNU-CRIS, she contributed to the research output of the programme “Changing patterns of regional and global governance” under the supervision of Luc Soete and Andrew Dunn.