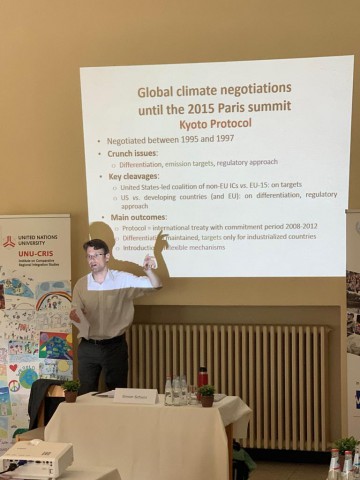 The topics of day two centred around climate and energy governance. We started with a lecture by Professor Simon Schunz from the College of Europe, and UNU-CRIS Associate Research Fellow. Titled “Global Climate Governance, the Paris Agreement and the European Union”, it was a very insightful presentation of the latest trends in climate policymaking, with notable emphasis on the UNCCC, the Kyoto and the Paris Agreements.  The focus was on the efforts undertaken by the European Union in the context of the United Nations frameworks for action.

Afterwards, we had a lecture by Susann Handke from the IIAS Centre for Regulation and Governance entitled “Dimensions of International Climate Cooperation” where we delved further into regional cooperation. She talked in-depth about both intra-EU and with the broader international community to achieve the goals set to minimise climate change and the efforts in carrying them out. The focus was on the challenges the EU must overcome in the short and long-term when it comes to building a resilient environmental governance for the continent and the world in the coming years.

For lunch we had quite a surprise as well. Because the UNU-CRIS is located in the premises of a XVII century seminary, we had the opportunity to eat in its dining hall, where we got treated to some croquettes and chicken in beer sauce. 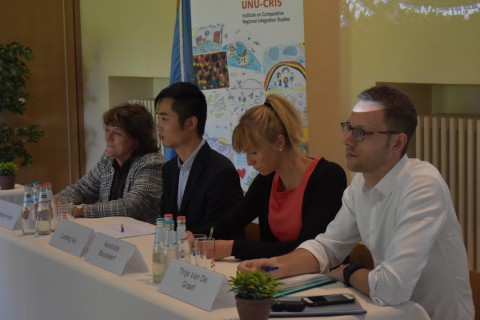 In the afternoon, a panel discussion was held. We had presentations by three panellists and, thereafter, the floor was open for discussion. The first speaker was Thijs van de Graaf, Assistant Professor at the Ghent Institute for International Studies. The topic was the geopolitics of energy transformation and how relying less on strategic resources such as fossil fuels, and more on renewable resources such as wind and solar energy, could bring about a more peaceful world as well.

The next speaker was Reinhilde Bouckaert, Project Researcher at UNU-CRIS. She discussed regional cooperation in environmental monitoring and deliberation in the Union for the Mediterranean, which is a broader grouping that also includes the EU. Lastly, Lunting Wu, Visiting Scholar at UNU-CRIS, presented the ongoing EU-Horizon 2020 research project on the low-carbon transition in Southeast Asia. The ensuing debate was very engaging, and particularly so when geopolitics got into the mix. The range of issues raised was quite broad, from small-scale local projects in the energy transformation to the role of A.I. and beyond. After the debate was over, we still had the opportunity to grab some coffee and talk to the panellists before heading home.