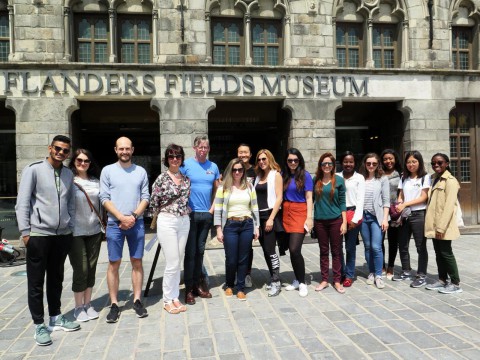 On Saturday, the summer school participants had the option to join an educational trip to the city of Ypres and Flanders Fields. Ypres is well-known across the world as one of the main stages the First World War was fought on and is a highly frequented travel destination for English, French and other peoples who come to learn about the devastation of war or come to commemorate their fallen family members.  The first stop was the Tyne Cot Commonwealth War Graves Cemetery and Memorial, a massive English graveyard that is famous for its sober white stones that spread out over the massive field, clearly showing the mass scale of casualties that the United Kingdom sustained during the war. It is a sight that many makes many people ponder on the atrocities of war, but also shows its global scale as they can find graves from people from Australia, Canada, India and other Commonwealth nations amongst the white stones.

Thereafter the summer school went to the Menin Gate Memorial to the Missing, a monument to all those who had passed but weren’t able to rest among their fellow men. The walls of the gate are filled with 54,395 names of Commonwealth soldiers who died in the surrounding fields, but whose bodies were never identified or found. Every evening at 8 o’clock, the people of Ypres express their gratitude towards those who have given their lives for Belgium’s freedom and sound the ‘Last Post’. It is a ceremony that started in 1927 following the opening of the Menin Gate Memorial and since then this daily ceremony has been conducted uninterrupted since 2 July 1928, except for the Second World War when the ceremony wasn’t held in Ypres but in Surrey, England. As such, it was quite an experience being there and seeing a part of history that is still so very alive today.

The next stop was the Saint George's Memorial Church, which was also built to commemorate the British and Commonwealth troops that died during the First World War around Ypres. From the church, the summer school made its way to the Flanders Field Museum, named after the famous war poem by John McCrae. At the museum you can learn about the lives of the soldiers who died at the battle, their pasts and for those who survived, their futures. But the most profound experience was their in-depth exposition on the battle of Passchendaele, also now as the Third Battle of Ypres and previous battles. They are known for their brutality as the soldiers walked through ravaged fields of mud to be mowed down by machine guns or choke on mustard gas. Of all visits, the Flanders Fields Museum truly makes you understand the horrors of war and why we must avoid it in the future - a goal as students of the EU and the UN all our summer school participants will surely strive towards.