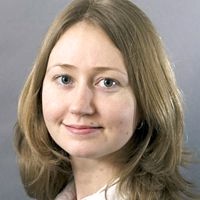 Tatiana Skripka is an Associate Research Fellow at UNU-CRIS since March 2012. She is also an SNF post-doctoral research fellow and visiting researcher at Maastricht University and UNU-MERIT in Maastricht, The Netherlands. Her research focuses on the impact of EU integration on regional cooperation in other parts of the world, and EU rule transfer to the neighbouring states. It is supported by the Swiss National Science Foundation. She also teaches comparative regionalism at a post-graduate level at the Maastricht Graduate School of Governance and UNU-MERIT and advises on individual curriculum development at the University College Maastricht.

Previously, Tatiana Skripka was a post-doctoral researcher at the Research College (Kolleg-Forschergruppe, KFG) 'The Transformative Power of Europe' at the Free University of Berlin, Germany, with a project on 'The EU and External Regional Cooperation'. In 2006-2010, she collaborated as a research associate in the NCCR Democracy research project on 'Democracy Promotion in the EU Neighbourhood' led by Prof. Sandra Lavenex and Prof. Frank Schimmelfennig and based at the University of Zurich, Switzerland. With the emphasis on the EU, the project investigated indirect strategies of external democracy promotion to countries facing domestic resistance to democratic development. Tatiana Skripka received her PhD in European Politics in 2011 from ETH Zurich, Switzerland. Her research interests lie in the fields of European integration, comparative regionalism, EU external relations, and democratisation.