Theorizing the European Neighbourhood Policy - towards a Research Programme 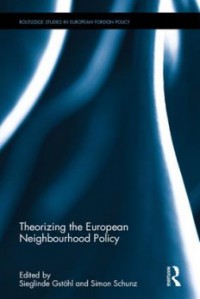 Despite growing scholarly interest in the EU’s flagship policy towards its Eastern and Southern neighbours, serious attempts at theory-building on the European Neighbourhood Policy (ENP) have been largely absent from the academic debate.

This book aims at contributing to fill this research gap in a three-fold manner: first and foremost it aims at theorizing the ENP as such, explaining the origins, development and effectiveness of this policy. Building on this effort, it also pursues the broader objective of addressing certain shortcomings in EU external relations theory, and even beyond, in International Relations theory. Finally, it aspires to provide new insights for European policy-makers. It is one of the first volumes to provide different theoretical perspectives on the ENP by revisiting and building bridges between mainstream and critical theories, stimulating academic and policy debates and thus setting a novel, less EU-centric research agenda.

This text will be of key interest to scholars, students and practitioners in EU external relations, EU foreign policy, the European Neighbourhood Policy, and more broadly in European Union Politics and International Relations.