Is There an Asian Pacific Model of Regional Agreements? 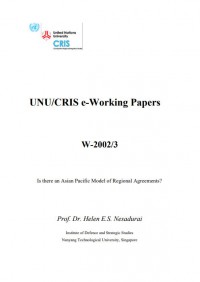 Until 1989, the Asia-Pacific region lacked any formal or inter-governmentalarrangement for regional economic cooperation. Thirteen years on, the situation hasaltered dramatically. Today, the Asia-Pacific is a region where a bewildering array ofregional agreements is in place, with more anticipated over the next few years. Thesearrangements range from the ‘minilateral’ Asia Pacific Economic Cooperation(APEC) forum established in 1989 and the ASEAN Free Trade Area initiated in 1992.While the former at present includes 21 members from both sides of the PacificOcean, the latter is regarded as a sub-regional economic cooperation arrangementamongst the ten member states of the Association of Southeast Asian Nations(ASEAN). Until 2000, these two regional projects were the sole economiccooperation arrangements in the Asia-Pacific region. Since 2000, a number of newregional economic arrangements has emerged, among them the ASEAN-China freetrade area (FTA) and a variety of bilateral FTAs. New proposals for more bilateraland plurilateral FTAs have been announced as well.