Thomas Diez is Professor of Political Science and International Relations at the University of Tübingen.

He received his PhD from the University of Mannheim in 1999. From 1997 to 2000, he was Research Fellow at the Copenhagen Peace Research Institute and subsequently, from 2000 to 2009, Lecturer, Senior Lecturer and then Professor of International Relations and Head of Department at the University of Birmingham. He joined Tübingen in April 2009. Diez has also taught in Copenhagen, Aarhus, Munich and Victoria (BC).

In September 2009, he received the Anna Lindh Award for his contribution to the field of European Foreign and Security Policy Studies. Thomas was President of the European International Studies Association (EISA) 2015-7. 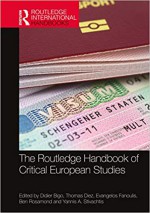 The European Union External Action in Times of Crisis and Change - Public Diplomacy and ...