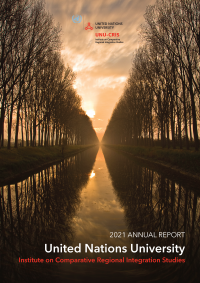 At the moment of writing this introduction, the dark clouds of the COVID-19 pandemic are slowly drifting away, at least so it seems. Not to make space for bright blue skies, however, but to be followed by the dark clouds of the war in Ukraine, happening only 1400 km from Bruges, where UNU-CRIS calls home. Several of our collaborators have family, friends or colleagues in the region, and/or work on aspects of Eurasian regionalism in their respective research projects.

These recent developments, adding to the other ongoing crises and conflicts in different parts of the globe, are likely to worsen even further the already severely impacted human development indicators and perceived human security worldwide (Special Report on New threats to Human Security in the Anthropocene - Demanding Greater Solidarity, UNDP, 2022). Both crises, if they serve any purpose at all, show once again the importance of regional cooperation and regional stability, and show that their absence leads to greater human suffering and loss of life. Nothing more is needed to motivate our work.

UNU-CRIS has and continues to contribute to the discussion on regional health governance by producing think pieces and analyses in different formats: blogs, policy briefs and working papers (see pg. 40, 43, 56). UNU-CRIS produced, for example, a report on post-COVID-19 recovery in Latin America for UNDP (to be published in the new year) and a policy brief on Regional Collective Action to Address COVID-19 and Prepare for Future Pandemics as input for the G20 summit. Researchers also conduct research related to Eurasian regionalism.

However, these two lines of research constitute only a fraction of the rich research that was conducted at UNU-CRIS under each of the research programmes and  clusters that were introduced a year earlier, these being ‘Regional Public Goods’ (RPGs) with clusters on migration and social policy, economic interactions, digital governance and nature, climate and health; ‘Regional Integration Knowledge System’ (RIKS); and the ‘Regions and Cities Governance Lab’ (Re-LAB). The nature, climate and health and Re-LAB clusters are now led by two senior research fellows who joined UNU-CRIS in August 2021, Nidhi Nagabhatla and Frank Mattheis, respectively. The evolving nature of the world around us is reflected in the merging of our previous climate and natural resources cluster with that focussed on health, to sharpen our focus on the intersection and interplay between the two, giving life to the nature, climate and health cluster, and the incorporation of the security cluster into Re-LAB, reflecting the challenge of security that requires coordination across the levels of governance, and showing the conflict-cooperation dichotomy. The outputs and impact of the activities in each cluster can be discovered in this report.

Some of the highlights of 2021 include UNU-CRIS’s impactful presence at the Annual International Studies Association (ISA) Convention in April, the organisation of the EU in International Affairs Conference in May (in collaboration with the VUB, ULB, the University of Warwick, and the Egmont Institute), the launch of the indicator-based local SDG Monitor in October (in collaboration with IDEA Consult), and projects conducted for UNDP and for the Scottish Association for Marine Science (SAMS), to name just a few. UNU-CRIS also contributed with two policy papers to the Think20 Summit, the academic arm of the G20 (one on regional health governance, the other on return migration) and organised a panel on the Future of Global Health Governance at the UNU-WIDER Development Conference in September. As in 2020, COVID-19 severely hindered the organisation of in-person events. The Summer School on Comparative Regionalism in a Changing World (in collaboration with Universitas Airlangga and Higher School of Economics of M. Narikbayev KAZGUU University) in June, the School on Modern Diplomacy (in collaboration with the Diplomatic Academy of Vienna), and the Doctoral School on Latin American, European and Comparative Regionalism (in collaboration with Universidad Andina) were all held virtually. This was also the case for regular research seminars and invited lectures, while the majority of internships and visiting research fellowships were conducted virtually too.

2021 also marked the end of a five-year cycle for UNU-CRIS, governed by a Memorandum of Understanding between United Nations University, the Flemish Government, Ghent University and Vrije Universiteit Brussel. 2021 was, therefore, an evaluation year in which UNU-CRIS was externally evaluated on behalf of the Flemish Government. Overall, the results were very positive for UNU-CRIS. The evaluators and the international expert panel found that UNU-CRIS had performed well during a turbulent period and that most of its strategic and operational goals had been achieved. They confirmed its good reputation in the relevant academic fields and among policymakers. They pointed to the synergetic relationship with the Flemish universities and UN institutions, thus creating value added for all its stakeholders. Overall, they found that the thematic relevance of UNU-CRIS remained very high and recommended to continue funding the Institute (Evaluation of UNU-CRIS 2014-2021, Technopolis Group, October 2021).

Following this positive evaluation, the Flemish Government decided to renew its commitment towards UNU-CRIS for a new period of five years at the Flemish Council of Ministers on 17 December, a decision for which we are very grateful. Our two partner universities also renewed their strong commitment to support UNU-CRIS. A new Memorandum of Understanding between the same four stakeholders was negotiated at the end of 2021 and is to be signed in 2022.

This assures that UNU-CRIS will be able to operate on a stable foundation for another five years, and further consolidate its position as a unique research institute with a global mandate, conducting policy-relevant research on regional and multi-level governance to improve lives of the peoples of the Member States of the United Nations. A strategic planning exercise will be conducted in 2022 to further refine the Institute’s research agenda, taking stock of our growing and diverse expertise, and to define priorities for the quinquennium.