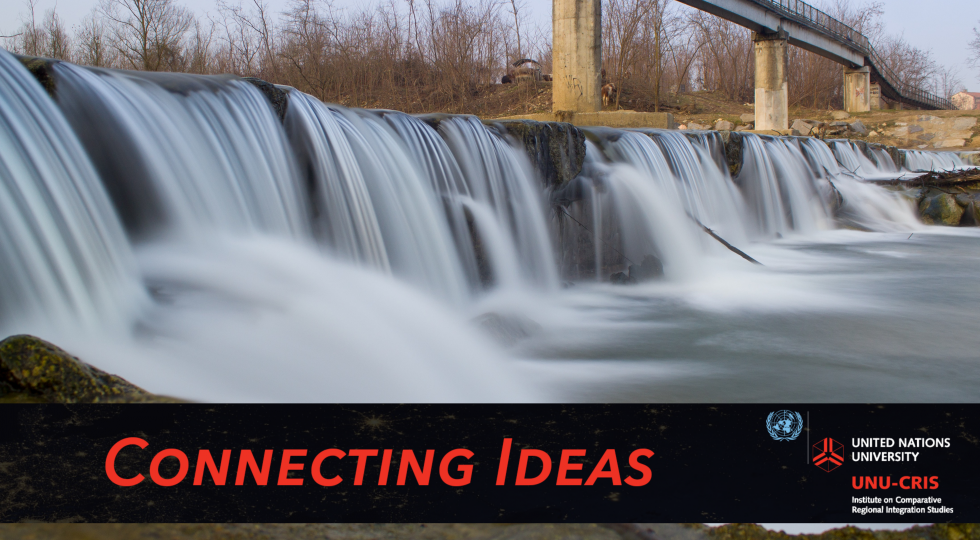 This blog post summarises the contributions presented at the webinar Water Rights and Water Fights: Transboundary Water Governance in Africa. It provides a multidisciplinary view on governance challenges and perspectives related to two mega hydraulic projects that could have adverse impacts on water rights. It was organised by the ERC Curiae Virides Project of the Brussels School of Governance(VUB), in collaboration with UNU-CRIS. The original version of this contribution was published under the Curia Virides Research Project.

The Relevance of These Cases from a Global Perspective

Africa has about one-third of the world’s international water basins, with 63 transboundary river basins covering about 64 per cent of the continent's land area. However, there is spatial variation in water access and distribution, and limited clarity about the legal and political frameworks for the efficient management of transboundary water resources. This blog post focuses on conflicts involving the three largest basins in Africa, namely the Nile, the Congo, and Lake Chad. 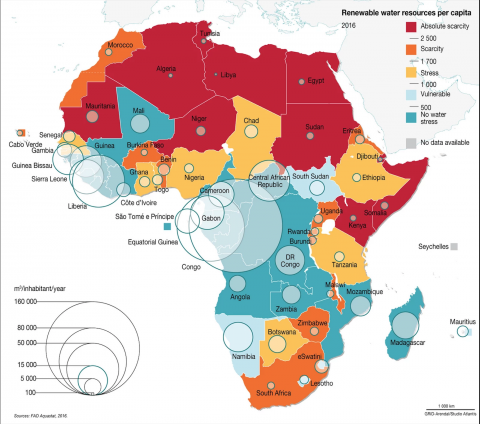 The Nile is the largest river in Africa and a central water resource for eleven countries. It receives 85% of its water from the Ethiopian Highlands through the Blue Nile. The Congo is the second largest river in Africa, representing one-third of the total fresh water in Africa and having the Democratic Republic of Congo (DRC) as a key player in this basin. Lake Chad, in turn, is a traditional shallow lake shared by Niger, Chad, Nigeria, and Cameroon, and extends as far as Algeria, Libya, and Sudan. However, its basin has diminished by 90% since the 1960s due to overuse and the effects of climate change. According to the UN World Water Development Report 2019, the regions involved in these water-related conflicts are confronted with significant water resource management problems such as physical water stress, low levels of access to drinking water, or both. Egypt, Niger, and Sudan are among the top 50 most water-stressed countries worldwide. The paradox, however, is that water-stressed Egypt makes water available to a higher proportion of people compared to the water-abundant countries in the Congo basin like the DRC. Nevertheless, statistical data on basin countries' freshwater availability or population access to drinking water is either lacking or inconsistent across the different sources of information.

The Fragmented Context of Mega Hydraulic Projects in these Basins

The first case is the conflict on water rights in the Eastern Nile Basin. In 2011, Ethiopia started the construction of the Grand Ethiopian Renaissance Dam (GERD), considered by Addis Ababa as essential for economic development and poverty reduction. The GERD is expected to produce as much as 6,000 megawatts of electricity, greater than the current energy output of the Aswan High Dam in Egypt. The electricity produced by the GERD will cover domestic consumption and the surplus will be exported to neighbouring countries. Ethiopia believes that the GERD will help mitigate problems such as floods and heavy sedimentation and make water flow into the Nile River more manageable, improving navigation, irrigation, and the generation of hydropower in downstream countries. Egypt (and to a lesser extent Sudan) argue that the dam will cause significant harm, and that Ethiopia is obliged under international water law to ensure national projects do not harm neighbouring countries. However, bringing the case to the International Court of Justice requires claimants to demonstrate that actual harm occurred when claiming protection  Costa Rica v Nicaragua case (2015).

Since the dam’s construction is essentially complete, the conflict has shifted to the time that it would take to fill the dam’s reservoir. Ethiopia wants to fill the reservoir in seven years or less, while Egypt and Sudan prefer a longer period, arguing that a much longer period will minimise damage to their water rights. Ethiopia has also argued that the failure of the three countries to secure an agreement for both filling the reservoir and managing access to the waters of the Nile River is due to Egypt’s and Sudan’s persistent references to their so-called “historically acquired rights”. These rights were granted by two treaties—the 1929 Anglo-Egyptian Treaty and the 1959 Bilateral Agreement between Egypt and Sudan. Ethiopia has consistently argued that it was not a party to these two treaties and, hence, is not bound by either of them. In addition, since these treaties allocate all the waters of the Nile River to Egypt and Sudan, excluding Ethiopia and other upstream riparian states, this allocation regime is neither fair nor equitable and, consequently, is not tenable. In 2015, Egypt, Ethiopia and Sudan adopted the Declaration of Principles and the Khartoum Document seeking cooperation, integration and sustainability, but the conflict has only escalated.

The second case is the conflict around the inter-basin water transfer (IBWT), or trans-basin diversion scheme. It concerns efforts to transfer water from the Congo Basin to replenish Lake Chad. This conflict mainly involves countries with a low proportion of population with access to drinking water. In the late 1970s, Bonfica, a state-owned Italian company, proposed the IBWT through the construction of a 2400 km canal between the Congo River and Lake Chad. The project also sought to build hydroelectric dams and provide irrigation for an area between 50000 to 70000 km2. The project is referred to as Transaqua Transfer Scheme, and estimated to cost as much as $14 billion. In 2016 the scheme gained momentum, as PowerChina signed a memorandum of understanding with the Lake Chad Basin Commission (LCBC). In 2018, the African Development Bank (AfDB) endorsed the project.

Except for the Belgian-Portuguese agreement (1927) and the establishment of the International Commission of the Congo-Oubgangui-Sangha (Commission Internationale du Bassin Congo-Oubangui-Sangha (CICOS, 1999), riparian countries of the Congo basin have not adopted other regulatory frameworks on water management.  The Protocol to the Accord Establishing a Uniform River Regime and Creating CICOS (2007) transformed CICOS into a modern watercourse commission. From an international law perspective, the functioning of these commissions is unclear as the variety of regulations hinders the identification of a common ground. Moreover, there is little data available on the documentation of those treaties. In fact, the founding documents have not been deposited either with the League of Nations Treaty Series (L.N.T.S) or in the United Nations Treaty Series (U.N.T.S), in spite of the existing duty of notification of international agreements. Many agreements have not been notified at the UNTS, although many of them (mostly excerpts) can be found on the internet. Therefore, the establishment of the entry into force is challenging, as in the case of CICOS. It is worth mentioning that except Cameroon, all CICOS are not part of the IBTW. Although the DRC strongly opposes the IBTW, CICOS has not expressed any support or rejection to it. This option contrasts with the promotion of the Transaqua project by the LCBC.

The impacts of the IBWT project are diverse. Although it could contribute to the development of large-scale irrigation projects, failures of these kinds of projects can be partially understood by several explanatory variables that operate as drivers. A feasibility study conducted by a Canadian firm established that Transaqua is not sustainable. There are also territorial traps that can displace local agricultural practices and affect local allottees of water. Another gap is that the private sector lacks a sensitive approach to the socio-cultural context and has not actively involved stakeholders and civil society. Local communities have not been informed about the impacts of the project, nor have they been involved in the construction of institutional and structural solutions either.

Several threads hold these cases together.

First, the complex governance of these basins is partly rooted in policies developed and implemented during the colonial period.

Second, the conflicts around the IBWT and the GERD involve countries with complex water management problems (low levels of access to drinking water and/or high levels of physical water stress).

Third, while both projects relate to water resource management, both have serious human rights implications.

Fourth, multiple actors with transnational reach play a significant role. In both projects, the direct involvement of Italian companies is remarkable. The involvement of Chinese investments in the IBWT is direct, whereas in the GERD it is rather peripheral. Global development cooperation agencies such as the World Bank and the UNDP (UN Development Programme), as well as regional actors such as the AfDB, have been funding projects around Lake Chad. The GERD has not received direct support from development cooperation agencies, although the AfDB has funded interconnection projects with Djibouti that would benefit from the GERD.

Fifth, in terms of African legal and institutional frameworks that could contribute to a sustainable and collaborative use of water resources in line with human rights and environmental standards, the African Union (AU) is the only organisation recognised by all states directly or indirectly involved in these disputes. So far, it has played an unsuccessful role in the conflict around the GERD, and it remains unclear whether it has intervened in the case of the IBWT. Although all the states involved in both conflicts are bound by the African Charter on Human and Peoples Rights (The Banjul Charter), only states directly involved in the IBWT conflict recognise the jurisdiction of the African Court of Human Rights. States directly involved in the GERD conflict recognise the jurisdiction of the COMESA (Common Market for Eastern and Southern Africa) Court, which recognises the applicability of the African Charter. However, none of the parties involved in these conflicts has taken its case to either of the two courts. Furthermore, the UN Convention on the Law of the Non-Navigational Uses of International Watercourses could provide a good legal framework to guide involved countries in finding adequate solutions, but only Chad, Niger and Nigeria have ratified it. Several non-binding guidelines could also guide interparty agreements on the management of these transboundary projects with an ecological and human rights sensitive approach, such as the UN Resolution recognising the human right to water and sanitation, or the Guidelines on the Right to Water in Africa from the African Commission on Human and People’s Rights. So far, this has not been the case either.

Sixth, in none of the cases, it is clear which measures have been taken by states and corporate actors involved to address adverse impacts. This is, whether the environmental impacts have been officially assessed, whether the results have been publicly made available to members of the potentially affected communities, and whether the projects need and obtained environmental permits.

Horizon on the Clouds

The absence of conflict does not mean ‘all riparian’ states agree on existing transboundary water sharing rules. In the conflict around the IBWT, it is mainly the DRC which opposes the water transfer scheme since DRC was not a party to its development. With respect to the conflict over the GERD, besides the mediation of the AU and the Arab League, Egypt has taken the conflict to the UN Security Council, which sent the issue back to the AU. Unfortunately, in both conflicts, some countries (Egypt and the DRC) have raised the possibility of using mechanisms other than peaceful talks and negotiation.

At the micro level, the adverse impacts on ecosystems and local communities has not received enough attention. The accountability of the companies involved has not been a central topic, neither at home nor in the host countries. At the basin level, the avenues to reach sustainable agreements require mutually beneficial agreements in good faith that consider the vulnerabilities and needs of the involved countries and their inhabitants. Nevertheless, conflict over shared water resources can be transformative – particularly when states challenge a status quo of unfair distribution. In such cases, conflict opens opportunities to achieve a fairer outcome.

Existing legal frameworks require the protection of ecosystems and human rights, particularly of vulnerable local communities, when implementing water infrastructure projects. Therefore, states involved in these conflicts need to frame the solutions within the scope of these normative frameworks, notably the Banjul Charter. They also need to ratify and implement other relevant instruments such as the UN convention on the Law of the Non-Navigational Uses of International Watercourses, always considering the context of the involved countries.