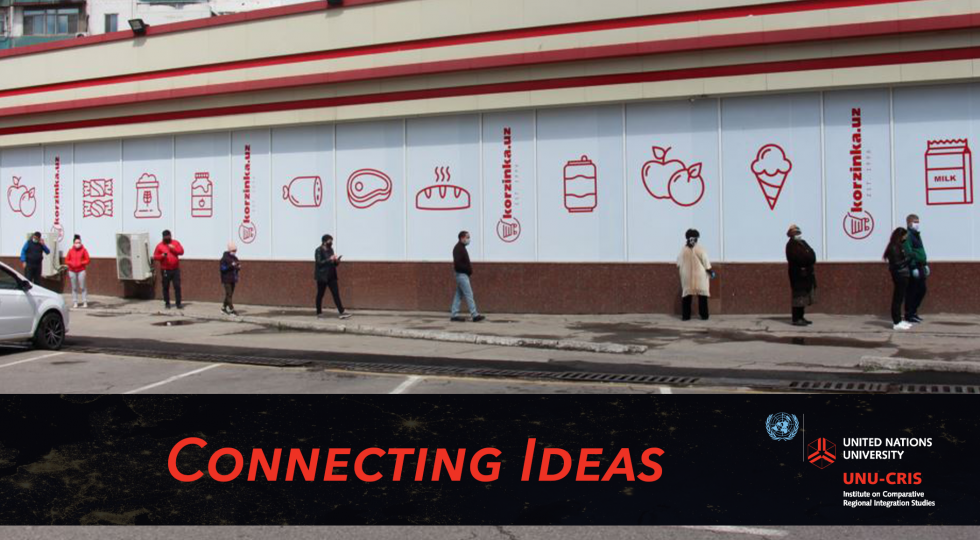 Disclaimer: This blog post is the written, adapted version of an oral contribution made originally at the EU-Central Asia videoconference on the Covid-19 pandemic’s implications in Central Asia on 14 May 2020.

The COVID-19 pandemic and ensuing crisis seem to have accelerated a global geopolitical shift that had been gradually manifesting itself in the past decade, but which now seems to have been fast-forwarded by the crisis. Indeed, many analysts and observers argue that the crisis has further consolidated the emergence of a multi-polar world, with China in the front row and with a declining role for the West.

In this regard, perceptions and images have been playing a major role in the current crisis. Considering that the pandemic has been hitting Europe very hard and that the crisis has gravely undermined the basic dynamics that underpin European integration, it is very likely that the crisis will negatively affect not only the perception of the EU abroad, but also its actual impact in steering reform processes and promoting regional cooperation abroad, including in a region like Central Asia.

We have all seen the lack of solidarity between the EU member states and the huge difficulties that the EU has encountered to coordinate measures to address the pandemic. These developments are very likely to decrease the credibility and appeal of the EU as a model for regional cooperation and as a force for good. It also opens space for other powers to step in and fill this power vacuum. Not surprisingly, both Russia and China were very quick to profile themselves as forces for good, ready to offer support in fighting the pandemic. Moreover, fake news and misinformation on how the crisis was being handled in the EU quickly started spreading in an attempt to further undermine the credibility and appeal of the EU. We should not underestimate the heavy toll that the EU will be paying in terms of its declining appeal abroad. There is a fast-growing narrative spreading that the EU will be much more geared towards itself, and will be mainly preoccupied with solving its own problems.

That said, the nature and scale of the problems that the Central Asian countries are currently facing leaves them almost no choice but to fall back on external assistance from international donors that have the means to offer financial support. Moreover, despite the negative impact that the crisis is having on the EU, the EU remains one of the key international donors capable of offering assistance to the Central Asian states that goes beyond loans. Hence, in all likelihood, the governments of the Central Asian states will be keen to continue their cooperation with the EU based on the priorities and ambitions laid down in the EU’s new strategy for Central Asia. This means that the EU should still have considerable leverage in cooperating with the Central Asian countries.

More importantly, the acute problems that the current crisis is creating for the Central Asian countries show the necessity of an increased focus on resilience-building and sustainable socio-economic policies for the Central Asian countries. In this regard, the EU stands out as one of the few international actors that offers support in these spheres. Of course, it cannot be expected that the EU could or should undertake such taxing efforts all by itself. Hence, teaming up with partners who share the same vision and have the same commitment to help create a more sustainable future for the region will remain crucial if the EU hopes to achieve any tangible outcomes in Central Asia. Moreover, a lot depends on how the EU and these partners envision the notion of resilience. The crisis has provoked a growing contestation of the notion of resilience, with some even arguing that the crisis has spelled the end of resilience as we know it. In contrast, others, including myself, assert that the crisis has only further revealed the relevance of resilience in today’s highly unpredictable and challenging world. However, this assertion is based on the understanding that resilience-building is about boosting “the ability of people or a society to self-organise, drawing on its local strength and knowledge of available resources, and more importantly, on their hope for a better future”.

China and Russia are still likely to remain very influential actors in Central Asia. China is even likely to further increase its influence over the region. Analysts have suggested that the crisis will only consolidate China’s determination to advance the Belt and Road Initiative (BRI). China is likely to adapt its BRI strategy to meet new needs in a post-Covid-19 world, which will be designed to help rebuild economies, support local manufacturing and industrial development, especially in such sectors as the health care sector and the green economy. In this regard, the EU is faced with two options when it comes to Central Asia. The EU could either continue to look for synergies with China, and try to find a common language with China in offering assistance and support to the Central Asian countries. This would be most feasible by linking their agendas in the context of the Sustainable Development Goals (SDGs). Or the EU could distance itself from China’s approach to socio-economic development in the region, and continue to portray the EU’s approach as more sustainable and hence more favourable. Whatever choice the EU will make, it seems that geopolitical tensions between the EU and China, as well as between the EU and Russia, are here to stay and will continue to affect the EU’s involvement in Central Asia.