Whither CARICOM States’ Interests in a New Age of Great-power Geopolitics? 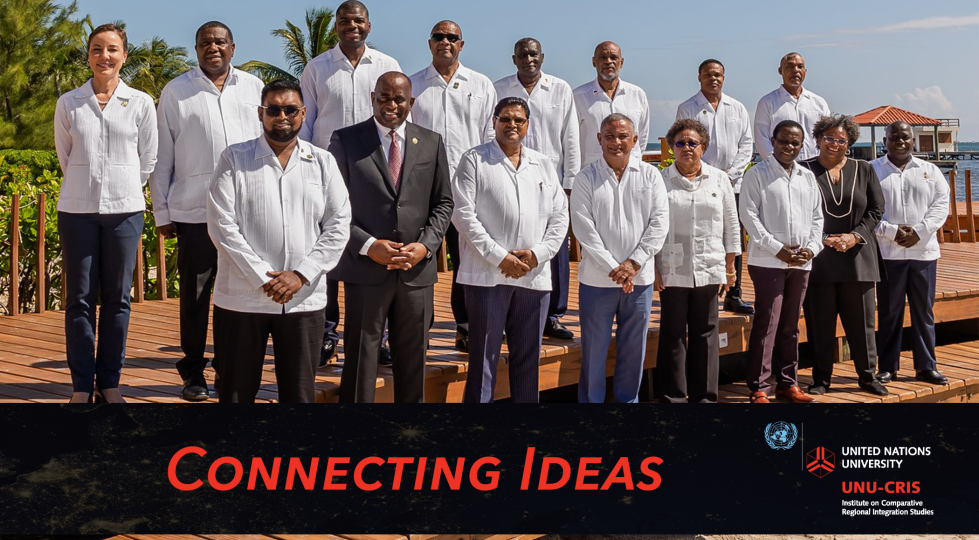 Manager of The Diplomatic Academy of the Caribbean in the Institute of International Relations (IIR)
The University of the West Indies (The UWI), St. Augustine Campus, Trinidad and Tobago

03 November 2022   |  #22.14 |    The author would like to thank Ambassador Riyad Insanally for his very helpful comments on an earlier draft of this article. The views expressed in this post are those of the author and may not reflect those of UNU-CRIS or the UWI.

For great powers and small states alike, geopolitical eras provide a cue to foreign policy orientations. This geopolitical reality must be understood within the context of “great-power leadership” and the national interest, as is well-known by the Caribbean Community (CARICOM) bloc of small states.

In a new age of great-power geopolitics, which is currently taking form, the CARICOM bloc of small states has met with renewed interest. Among the manifold reasons for this is some regional states’ geographic positioning relative to the Panama Canal, which is of great importance in Sino-United States (U.S.) competition, especially in light of Washington’s handover of the Panama Canal to Panama over two decades ago. While the national security and foreign policy establishments of the great powers gauge CARICOM member states’ geopolitical importance in such terms, the natural resource base of a few and the collective diplomatic usefulness of all also influence their value to that policymaking elite. This has long been the case.

During the height of the Cold War, which was an especially active period regarding U.S. foreign policy toward Latin America and the Caribbean (LAC), Washington highly valued the Caribbean Basin. The latter is, of course, closely identified with one of the Cold War’s most significant moments, the Cuban Missile Crisis.

Insofar as the Caribbean is the U.S.’s so-called “backyard”, historically, the region has attracted Washington’s foreign policy attention.

However, with the demise of the Soviet Union, Washington’s foreign policy priorities shifted. One outcome of this recalibration was that the LAC region featured less in U.S. foreign policy-making, even as the Caribbean – as the U.S.’s so-called ‘third border’ – remained in Washington’s foreign policy sights. Among the reasons for this focus was that – given its proximity to some Latin American countries which for several decades now have been contending with rampant organized crime, drug cartels with global reach and the narco-state phenomenon – the Caribbean grew in prominence as a major transshipment hub for illicit drugs entering the U.S. mainland. Also, some Caribbean countries emerged as major cultivation sites for marijuana. As a result of these developments – whose knock-on effects include corruption, drug-related crime and violence – several regional states have become considerably insecure.

Even as Washington worked to help shore up the U.S.’s ‘third border’ (especially over the last two decades of the twentieth and into the twenty-first century), partnering accordingly with Caribbean states, the September 11 2001 terrorist attacks on the U.S. homeland fundamentally changed the orientation of and left an indelible mark on Washington’s foreign policy calculus.

As the LAC region fell by Washington’s foreign policy wayside throughout the 2000s and for much of the 2010s, with the American-led ‘war on terror’ unfolding in earnest, a rising China moved to fill the breach. Once again, great powers are jockeying systematically for influence in the Caribbean.

This latest round of power plays in respect of great powers provides important clues about the evolution of their geopolitical thinking, even as it elicits associated questions.

Geopolitics in Flux: Recapping some Interests related to CARICOM States

With the geopolitics of our age in flux, for Caribbean foreign affairs policymakers, among the many questions arising are: Where do CARICOM member states stand? Moreover, how could this period of flux possibly impact on these states? In this context, given the varying foreign policy objectives at play, what are some of the dynamics in the relational mix?

In a series of three recently-published articles, with an eye to the dynamic official foreign policy positioning of those small states relative to great powers, I proffer a preliminary assessment of these research questions. Those interconnected articles – in order of publication – are titled:

The first and the third articles – as listed above – provide insight into a new era of great-power rivalry framed around the CARICOM bloc, highlighting some emerging patterns of such competition as driven by Russia, the U.S. and the People’s Republic of China (PRC), respectively.

As I explain in the third article and as I also set out elsewhere, CARICOM member states are contending with some knock-on effects of a revanchist Russia. However, there are interesting differences in support for the Russian geopolitical narrative across the LAC region. It is especially noteworthy that while Russia is not as isolated as Western leaders and diplomats let on publicly vis-à-vis its war on Ukraine, the Kremlin’s allies in the wider region do not demonstrate unwavering support in that regard. That said, the Kremlin relies most on Cuba, Nicaragua and Venezuela and correspondingly leverages its post-Cold War era foreign policy démarches to firmly re-establish a geopolitical and geo-economic foothold in parts of the LAC region. For example, the Kremlin has “deployed warships and nuclear-capable bombers to Venezuela and directed Russian oil giants, including Rosneft and Gazprom, to pump South American crude.”

In this moment, there has been a payoff for the Kremlin. Russia enjoys strong support  in some of the LAC region, with which the Kremlin has wide-ranging ties, including in the area of military cooperation. Some analysts have also called attention to Russian trade and investment in the wider region. While by their reckoning such engagement is “modest” relative to that of the U.S. and China, “Russia’s engagement with the region has openly challenged U.S security interests in the region in a way that the activities of other extra-hemispheric actors in the region have not.”

Although Russia’s contemporary relations with CARICOM member states are not purposed qua configured in this way, as compared to just a decade ago, the Kremlin is clearly paying more foreign policy attention to certain regional states. Notwithstanding, as intimated earlier, “[t]he security environment of the Caribbean is shaped by its proximity to the United States.” Regarding U.S. relations with CARICOM, the soft power-driven dimension of the U.S.’s CARICOM-related foreign policy approach is now favoured over the heavy-handed carrot-and-stick U.S. foreign policy approach of the Trump Administration. A good example of this is the U.S.-Caribbean Partnership to Address the Climate Crisis 2030 or PACC 2030, which the Biden Administration’s first National Security Strategy highlights and which was launched at the Ninth Summit of the Americas held in June 2022.

As regards the U.S., as I also note, regional states must be mindful of Washington’s power play relative to Beijing in the Caribbean Basin. This point comes through in the first article, as listed above. Washington is acutely aware of and compelled to up its Caribbean-wide foreign policy game in response to, inter alia, the growing role of Chinese lending and investor-type institutions in the Caribbean. Along with Chinese State Owned Enterprises, they are increasingly a fixture in high-profile sectoral/national developmental and capital projects from The Bahamas and Jamaica in the northern Caribbean to Guyana and Trinidad and Tobago in the southern Caribbean.

This comes at a time when “[t]he Latin American region [is] play[ing] an important role in China’s strategy for gaining access to natural resources worldwide.” While analysts of Sino-Caribbean relations point to the fact that the Caribbean is not in a position to extend to Beijing the scale of natural resources or even types of alliances that larger regions can, they also note how “geopolitically the region provides economic and symbolic incentives for China’s investments.” Notably, “[m]any of China’s largest infrastructure projects, like ports in the Bahamas and Jamaica, will be used to accommodate larger volumes of cargo coming from China for transshipment throughout the Western Hemisphere.”

Much of Beijing’s diplomatic activity and economic cooperation should be seen in the context of the PRC’s competition with Taiwan for diplomatic recognition in the region. This is a matter I discuss in the second article, as listed above. It highlights bilateral foreign policy-making in reference to Saint Vincent and the Grenadines’ (whose capital is Kingstown) diplomatic efforts during the latest Taiwan Strait flare-up. The article points to the fact that the Saint Vincent and the Grenadines Prime Minister Ralph Gonsalves has taken an increasingly hard line on Beijing’s bid to escalate rhetoric and actions directed at Taipei’s efforts to challenge the PRC’s ambitions relative to Taiwan.

That Kingstown’s Taiwan-directed external action is sui generis stands out, against the broader background of concern among all CARICOM bloc members about certain large states potentially being emboldened to make a mockery of the multilateral system.

The story of Saint Vincent and the Grenadines’ diplomatic efforts during the latest Taiwan Strait flare-up also illustrates that in cases of high politics-based foreign policy-making by respective CARICOM bloc members, prioritizing strategic relationships with extra-regional third States is the most likely foreign policy approach.

The combined articles under reference show that, following a relative (post-Cold War-related) lull in great-power rivalry, the contemporary foreign policy environment of CARICOM member states is characterized by heightened great-power-related complexities. Such complexities are especially difficult for those states to contend with in the face of balance-of-power challenges to the interstate system and to the postwar international order, which is buffeted by a crystalizing multipolarity. This at a time when – as compared to any other moment following the demise of system-wide bipolarity in the early 1990s – great powers are now seemingly edging closer to a new Cold War, with the geopolitical prize firmly in their sights, as is the Caribbean’s role in their wider foreign policy ambitions.

We must also factor into the geopolitical equation a core foreign policy precept in respect of the CARICOM bloc: The coordinative form of foreign policy-making in the regional integration schema. (This is a point that I underscore in the first article, as listed above.) Accordingly, the bloc is caught in a double bind: hawkish great-power competition is afoot in the core of the Caribbean Basin, once again, while the present trajectories of CARICOM member states’ foreign policy decision-making are such that key national-level considerations outstrip regional integrationist interests.

In sum, the CARICOM bloc’s current foreign policy construct likely will not resolve the broader question of relations between the bloc’s membership and great powers in a new age of (hegemonic) geopolitics. Foreign policy coordination among the bloc’s membership, then, must be improved by better (re)aligning associated regional intergovernmental processes. Now, more than ever they must be responsive to and function in sync with surfacing global realities, which more likely than not will be baked into the international system for some time to come.

More broadly, there must be a return to wholehearted and unequivocal support of fundamental and consequential United Nations (U.N.) principles among a representative cross-section of the U.N.’s membership. CARICOM member states’ respective multilateral diplomatic agendas ought to have a hand in giving new impetus to strategies for and agency in respect of international cooperation. After all, the future success of small(er) states in navigating international politics depends on that membership continuously reinforcing attendant institutions.