How are CSOs Contributing to the GCM Process? The Experience of a Returnee-Led Group from Gambia Unable to Attend The IMRF 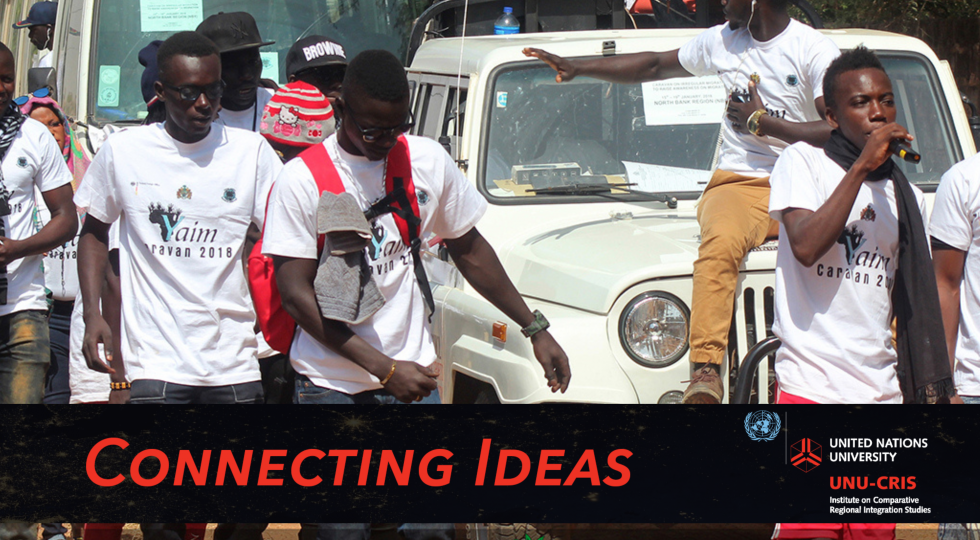 This blog is part of the UNU Migration Network series of articles on the IMRF.

A distinctive trait of the creation of the Global Compact for Migration (GCM) was the involvement of civil-society organisations (CSOs) in the process. CSOs have been involved in both “invited” and “invented” negotiation spaces, where they have given input on the formulation of the GCM both formally and informally (Rother 2020). However, CSOs from the Global South have lamented the hindrance in their participation during the ratification stage, for example due to difficulties in acquiring visas (Squire 2019). While a “whole-of-society” approach should also characterise the implementation and monitoring of the GCM on paper, it appears that CSOs are still not engaged fairly based on their provenance and (lack of) endowments. This is confirmed by the experience of Youth Against Irregular Migration (YAIM), a returnee-led association from The Gambia, West Africa. This grassroots organisation, formed by Gambian migrants imprisoned in Libya in 2016, received accreditation to participate in the first International Migration Review Forum (IMRF) taking place in New York in May 2022 and aiming to assess international progress in the implementation of the GCM. Short of sufficient funds to self-sponsor its representatives’ journey to the US, YAIM applied for funding both at the UN and the governmental level. This support was not granted, ultimately preventing YAIM from being represented in the forum. This casts a shadow on the concrete extent of civil society’s participation in GCM-related processes and raises related questions on how and whether Southern and grassroots CSOs are appropriately supported to offset their unprivileged position vis-à-vis their Northern and well-established counterparts.

It is 2016 when a group of Gambians find themselves sharing the pains and horrors of imprisonment in Libya, after having left their country to look for better opportunities and embarking on the irregular journey to Europe commonly known as the backway. As they were realising that the frequent visits of EU delegations, IOM, and the Gambian government were not easing their appalling conditions in the Libyan jails, these predominantly young men and women started engaging in conversations on how to stand for themselves and prevent their fellow nationals from experiencing these agonies. This was the beginning of YAIM, that officially formed after the migrants were assisted in their return to The Gambia by IOM in 2017. YAIM took its first steps in visiting local and international stakeholders to present their newly formed association and seek support for reintegration and advocacy against irregular migration. This led YAIM to work in partnership with entities and organisations such as the German government, COOPI, UNICEF, and Football for a New Tomorrow (FANT) to conduct awareness-raising campaigns all over the country. Over the years, YAIM expanded its capacity and gained relevance and recognition among the local communities. On this basis, YAIM was invited by IOM The Gambia to request accreditation to take part in the first IMRF, along with other local organisations. Finally, YAIM and Jama Children Foundation were the only Gambian CSOs approved by the United Nations (UN) to attend the event. Depending upon the implementation of projects for its sustenance and not having own funds to sponsor its representatives, YAIM applied for funding from the UN for the travel and accommodation expenses they would have incurred. Simultaneously, the returnee group appealed to IOM The Gambia as well as the Gambian Ministry of Foreign Affairs for support. None of these actors eventually sponsored YAIM representatives’ trip to New York, making it impossible for any Gambian CSO to sit at the monitoring table. As such, no system of equal geographical representation seems to be in place to make sure that at least one CSO per country is enabled to participate in the monitoring of the GCM implementation. Furthermore, state participation is favoured over civil society’s, given that a delegation from the Gambian government attended the IMRF despite not facilitating YAIM’s expedition. Conclusively, it appears that representation and participation is conditional upon CSOs’ own (access to) endowments, rendering the GCM process partial and fallacious.

A wide and representative participation in the IMRF discussions would have been particularly fruitful in the case of The Gambia, especially comparing the content of the updated review of GCM implementation submitted by the Gambian government to the UN and the reality on the ground (Gambian Government 2022). This document puts to the forefront the contribution of actors such as IOM The Gambia, the International Trade Centre (ITC), and European development agencies. They have based their interventions on funding amounting to almost 40 million euros from the European Trust Fund for Africa (EUTF) (Marino et al. 2022). The report is replete with numbers of services provided, job opportunities created, and beneficiaries reached in the areas of fighting the root causes of irregular migration, providing access to basic services for migrants, and achieving the sustainable reintegration of Gambian returnees. However, grassroots organisations have been questioning this narrative. YAIM has voiced their criticism on a radio programme they conduct with funding from FANT, arguing that the real impact behind the numbers and targets incorporated in the report is very limited. Furthermore, the efforts made by independent returnee organisations are not highlighted, while the impact of the Migrants as Messengers (MaM) sensitisation project run by IOM is amplified. In fact, while YAIM was invited to contribute to the report by mentioning its activities and operations, the request was sent at short notice and with little contextualisation. This made it hard for an emerging grassroots organisation such as YAIM to organise itself effectively to put its evaluations in writing. Additionally, they claim not to be interested in translating their contributions into numbers and targets, as they are chiefly interested in making changes on the ground. Still, YAIM was able to be represented, although remotely, in a panel on regular pathways organised by the Global Research Forum on Diaspora and Transnationalism as a side event to the IMRF. There, they emphasised the importance of making safe and regular migration opportunities available to African youths, as mobility injustice is among the root causes of the deaths and suffering caused by the backway. In conclusion, them being prevented from partaking in-person in the IMRF and not being facilitated to contribute to or recognised in the submitted report, YAIM has recurred to alternative communication channels as well as side events to vent its frustration and attempt to correct the biased representation of the implementation of the GCM in The Gambia. Assuming that YAIM’s experience is not unique, it is essential to ensure that the next steps to the GCM implementation be inclusive and just, for substantially attaining the positive migration management that the agreement claims to be aiming for.