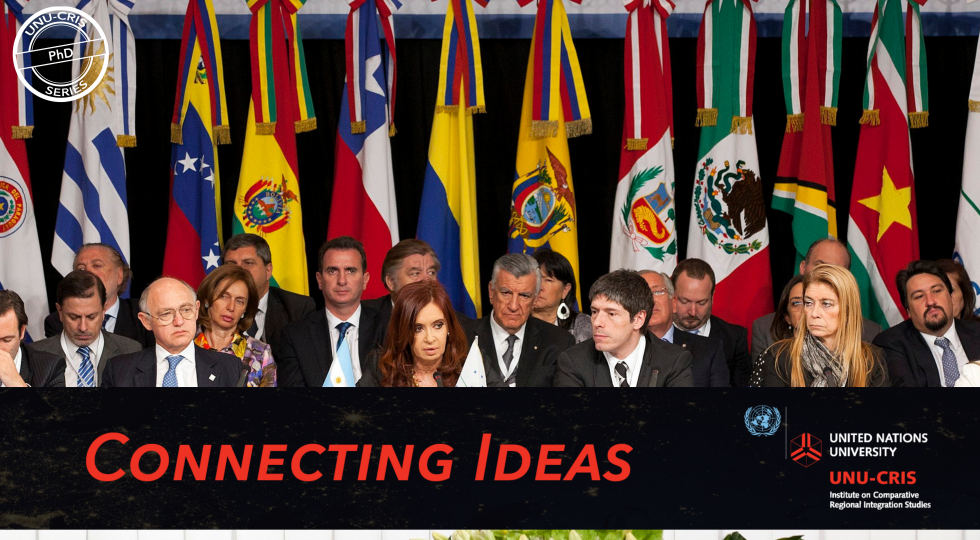 The XLIII Summit of Heads of State of MERCOSUR and Associated States was inaugurated at Mendoza (Argentina), June 29, 2012. Image credit: Fernanda LeMarie - Ministry of Foreign Affairs, Trade and Integration via Wikimedia Commons.

In the last few decades, the creation of regional organisations (ROs) over the world created a multi-layered chain of interactions within projects, and an “alphabet soup” of acronyms. The simultaneity of actions and the coexistence of regional institutions generated the guiding questions of my doctoral thesis. The research addressed how overlapping regional organisations behave and interact when they have concurrent competencies over political crises, and the effects of this coexistence for the functioning of the region’s complex scenario, regarding their cohesion or fragmentation.

The studied phenomenon of overlapping ROs results from the fact that multiple regional projects coexist in the same space, and it occurs when states are affiliated with several of these initiatives (overlap of memberships), which in turn have similar objectives in their policies (overlapping mandates). However, a different type of overlapping in action, or a de facto overlapping can also be perceived, as different moments of regionalism also produced some intra-bloc sectorial segmentation derived from the institutional broadening of existing initiatives and the expansion of mandates, which was examined in this study. 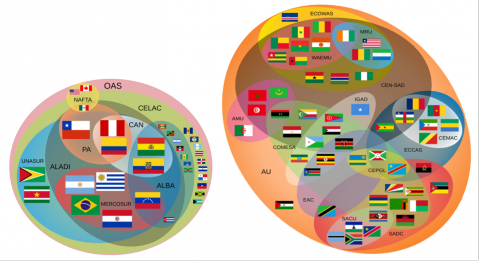 Considering the need to develop empirical studies on overlappings to consider its effects and understand if ROs would cooperate or compete in action, the research aimed to contribute to Comparative Regionalism studies by analysing two regions Africa and South America, to enable generalisations and comparisons. The choice was made to avoid the dilemma of treating a single experience as a reference, or the n=1 dilemma, valuing the individual experiences of each region, and the Global South as a producer of regional dynamics.

Political crises as entry points for the discussion were chosen due to their character as particularly sensitive issues to ROs, which would demand more institutional action and provide more data to the research. The term was used to comprise incidents such as coups and attempted coups d’état; undemocratic seizing or maintenance of power; and violations of the constitutional order; which are known as democratic ruptures and invoke the use of mechanisms for democracy protection (MDPs) in South American Regionalism; and are labelled as Unconstitutional Changes of Government, by African regulations.

The case analysis thus addressed the behaviours of the African Union and the Regional Economic Communities (ECOWAS, SADC, CEN-SAD, ECCAS, EAC, COMESA, AMU, and IGAD) over the Madagascar 2009, Mali 2012, Central African Republic 2013, Egypt 2013, Burundi 2015 and Gambia 2017 crises; and the interactions among the competent ROs in South America, namely the OAS, UNASUR, ALBA, CAN and Mercosur, during the Ecuador 2010, Paraguay 2012, and the 2013 Venezuelan crises. The research relied on primary and secondary data to trace institutional patterns of action, such as ROs official documents, specific literature, and reports from think tanks and research institutions, discussions with researchers of the field, interviews with AU officials, and journalistic material about the events.

Over the course of the thesis, the combination of theoretical and empirical elements allowed for contributions on ROs’ behaviour, the concept of overlapping in action, individual insights from Africa and South America, and the potential for complementarity and fragmentation of the complex regional scenarios. The compilation of possible behaviours was organised in the form of a typology developed according to the theoretical propositions of the consequences of organisational behaviour, ranging between full cooperation and total segmentation, adding nuances to interactions. Moreover, the case analysis provided the possibility to synthetise pragmatically what the overlaps meant to the studied regions, to conceptualise what a de facto overlap meant in procedural terms, and what are the constraints imposed by this type of organisational interaction.

Regarding the regional outcomes of overlaps, even though overlapping scenarios have an intrinsic potential for frictions and fragmentation, the research demonstrated that the potentiality for cooperation and complementarity is something that can be fostered through regional politics. With a clearer set of norms and division of labour, blocs have more predictability and security on interplays, and would not have to compete for leadership or take measures to exclude alien action, thus strengthening regional cohesion.

Finally, even though establishing causalities for the specific behaviours and outcomes was not a part of the initial objectives, some factors and commonalities through the case studies were very noticeable. The thesis thus leaves the door open for the continuity of the research agenda on overlapping ROs, with the enumeration of possible causalities for behaviours, as for instance, the institutionalisation of normative provisions, and the reluctancy to let norms and behaviours be institutionalised; the realisation of member states’ domestic interests and strategies; the relevance of the policy domain to the RO’s core; the presence and absence of regional and external powers; and the dispute over the regional domain legitimacy.