After the Arab Spring: Rethinking the Role of Regional Organisations in Supporting Democratic Governance 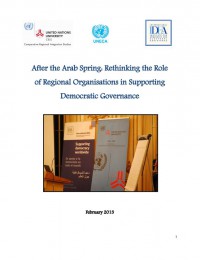 The United Nations University Institute on Comparative Regional Integration Studies (UNU-CRIS), the United Nations Economic Commission for Africa (UNECA), and the International Institute for Democracy and Electoral Assistance (IDEA) jointly organised an international conference entitled, After the Arab Spring: Rethinking the Role of Regional Organisations in Supporting Democratic Governance, which took place in Brussels, Belgium, during the period 22-23 November 2012. In these challenging post-Arab Spring times, the Conference offered a timely opportunity to evaluate the profound changes impacting political, economic and social factors in the region and beyond, particularly in the light of the role to be played by regional organisations. During two days, 65 policy makers, senior officials of key regional organisations, leading academics, scholars, practitioners and civil society organisations gathered with the aim of: