Mutual Trust in Regional and Interregional Cooperation on Counterterrorism: Approaches from EU and ASEAN 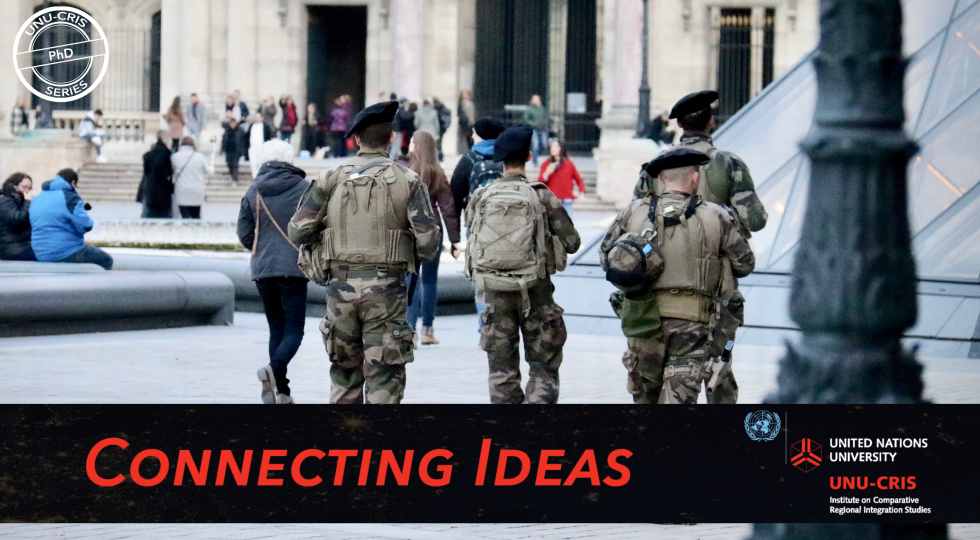 “Where the stakes are the highest, in the war on terror, we cannot possibly succeed without extraordinary international cooperation.” - Barack Obama, Chicago Council on Foreign Relations, 12 July 2004

The potential lack of trust between competent authorities is among the causes hindering this "extraordinary international cooperation." In this context, this research analysed how mutual trust has been developed and operationalised to facilitate cooperation against terrorism between competent national authorities within the European Union (EU) and Association of Southeast Asian Nations (ASEAN) and, between these regions.

Mutual trust is a flexible concept with social, political and legal dimensions. It knows varying statuses, understandings, degrees, implications, and occurs at different levels. A data analysis matrix was designed to examine the regional approach towards the process of mutual trust-building and, subsequently, interstate cooperation. This matrix is composed of three clusters: capability building (framework for members to work together); capacity building (providing them with sufficient skills and tools); and data sharing.

a. The respective regional legal architectures in counterterrorism

The UN has promoted the criminalisation of terrorist offences (1) and the development of cooperation (2).

(1) The EU and ASEAN’s normative architectures in counterterrorism are a combination of various top-down and bottom-up normative influences.

Looking at the regional-national normative dynamics, there are no dual-level relations between ASEAN and its members; with the members being the sole actors responsible for the functioning of the organisation. The influence is rather horizontal. For instance, the influence between Brunei, Singapore, and Malaysia’s antiterrorism norms is evident. By contrast, there is a cross-fertilisation between the EU and national norms. These vertical interactions led to the respective regional legal frameworks within which mutual trust-building activities are conducted. This explains the differences between the two regions’ choices of activities and the differences in impact that the various activities have on the development of mutual trust in one region or the other.

Analysing these vertical normative interactions, we can see that the more the legal dimension of mutual trust is built, the more Member States are willing to adopt regional norms in counterterrorism approximating national legislations. Conversely, the more anti-terrorism legislations align, the more likely Member States will be ready to trust each other’s legal systems - which would subsequently, facilitate cross-border cooperation.

(2) The EU and ASEAN Member States agreed to cooperate with each other against terrorism, but there are strong discrepancies between their cooperative dynamics.

While informal interactions have not disappeared from the EU panorama, the Member States have established ambitious cooperation mechanisms as well as regional bodies aiding the flow of data. By contrast, ASEAN Member States have only agreed on platforms of dialogue facilitating the social and political dimensions of mutual trust. These discrepancies may partly be explained by chronological differences, whereby intraregional cooperation in criminal matters emerged much earlier in the EU (1970s) than in ASEAN (late 1990s). However, it remains unclear whether ASEAN is at an early stage of the path taken by the EU or whether it follows a different path altogether. Analysing the horizontal interactions, we can see that the more the three dimensions of mutual trust are built, the smoother cross-border cooperation becomes. Conversely, the more authorities engage in dialogue, share experiences, expertise and data, the more likely they are to trust each other.

Due to the asymmetrical nature of EU-ASEAN relations, interregional relations hardly occur between the two regional organisations as such (inter-organisational interregionalism). The EU has tried to boost regional integration in ASEAN. However, ASEAN Member States keep a strong attachment to national sovereignty. Therefore, the EU’s approach has evolved, moving from a one-size-fits-all approach to a tailor-made one, adapting to its interlocutor’s needs, conditions, limits, and objective(s).

The inter-organisational relations have nonetheless fostered, to a certain degree, the EU and ASEAN’s actorness on the international scene. They might even benefit their fight against terrorism in the long run.

The 'chicken and egg' dilemma

Elaborating upon the correlation between the development of mutual trust and cross-border cooperation, it is not possible to draw an indisputable conclusion on the ‘chicken and the egg dilemma’ of ‘the order in which one caused the other to emerge’.