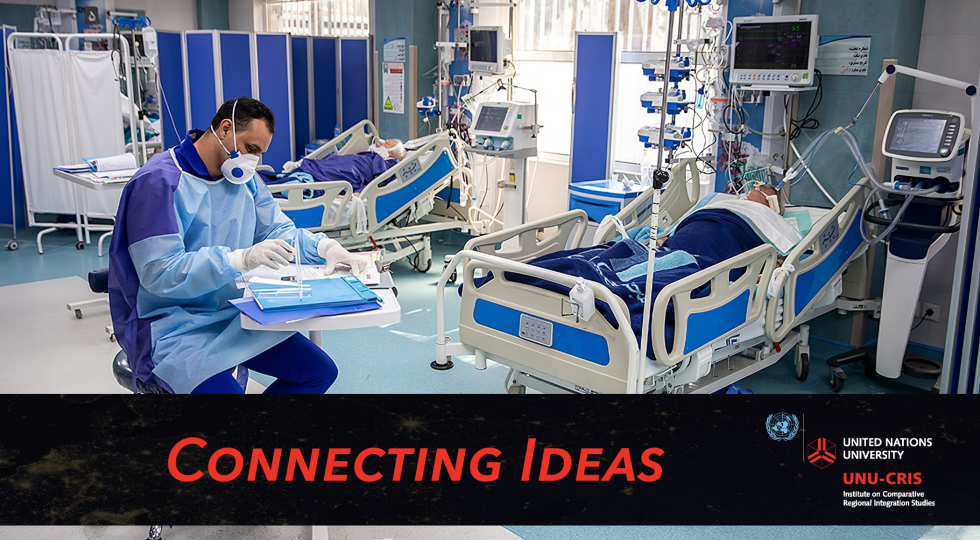 Head of Politics and International Relations and Professor of Global Politics, University of Southampton

Past Lecturer at the UNU-CRIS/UASB Doctoral School on Latin American, European and Comparative Regionalism

An Epidemic That Challenges Political Scenarios

Scenarios are plausible stories that help imagine and forecast future developments. Political scientists have developed scenario-based forecasting, modelling, simulations and other techniques to, if impossible to predict, at least estimate political-institutional, socio-economic and demographic futures. In theoretical debates, prediction represents a central premise regarding the extent to which we can consider the study of politics a scientific matter. In times of global (health) crisis, however, this premise succumbs. What COVID-19 reveals is a fog of uncertainty for the study and practice of politics. For Latin America this is particularly sobering, as the crisis collides immediate sanitary challenges in weak - or weakened – states, and fragile health systems, with long term impacts on poverty, socio-economic and gender inequalities, and labour precarity and informality. Certainly, the magnitude of COVID-19 puts not only governments and health systems under immense stress, but also the economy, employment, and social habits of everyday life. Furthermore, many determinants of health extend beyond the national territory.

While the state still exercises undoubted and indisputable regulatory power over public health decisions and over societies within their own territorial limits, the scope and implications of health crises, as manifested in the COVID-19 pandemic, are and will be a cross-border and global problem. Health, after all, is not only political but also a central element of foreign policy. It has been so in Latin America since the first experiences of cooperation in the Rio de la Plata in the mid-19th Century, when an immigration wave induced the establishment of compatible quarantine protocols. In the 20th Century, global crises stemming from pandemics such as HIV and AIDS, severe acute respiratory syndrome (SARS), or the spread of pandemic influenza A (H1N1) showed little respect for state borders or notions of sovereignty.

In this framework we ask, what, if any, are the possibilities for regional organisations, in general, and in the case of Latin America, to provide leadership and direction in support of health governance?

In the current scenario, some of the critical premises for stopping the spread of COVID-19 are social distance and political leadership. It is precisely distance and leadership that are at the core of any stark response to the crisis. In elaborating this point, I propose that, unlike in the past decade, political distance between the countries of the region and lack of leadership affect the possibility of reaching concerted policies in terms of regional health governance, and to address coronavirus more specifically. This situation is problematic, among other things, because the global health crisis unleashed by the expansion and rapid spread of the coronavirus poses threats and challenges for a region that will see consequences, not only in terms of morbidity and mortality, and impact on health systems. Health, but also in economic activity and population movement, all will require responses at multiple levels of governance.

One of the main characteristics in global health diplomacy in the last decades has been how to reinforce multilateral and regional cooperation for health governance.  In South America, both Mercosur and UNASUR created regional opportunities and strategies for health diplomacy in the direction of production and commercialisation of medicines, joint purchases and cartels of buyers lobbying prices vis-à-vis international pharmaceuticals, the exchange of knowledge and good practices in health policy between countries, and the coordination of common positions in multilateral forums, particularly at the World Health Organization, for the promotion of equity in health and participation of developing countries in global governance of health.

The coronavirus pandemic, however, reached a dis-united Latin America. It hit in late February, when Brazil confirmed a case in São Paulo. To date (6th April) nearly 12,000 cases were already registered in that country, over 3600 in Ecuador, 4471 in Chile, more than 1500 in Argentina and Colombia, around 1500 in Peru and Mexico, and the trend is clearly on the rise.

But the implications of the exponential growth of COVID-19 on public health must also be measured in broader terms; particularly in relation to vulnerabilities, inequalities and exclusion of different population groups, of gender, age, for being refugees, migrants, people with disabilities, living with HIV, with chronic non-communicable diseases, and with infectious diseases typical of lesser countries developed - that is, with “diseases of the poor” that reproduce in conditions of socio-economic precariousness - and with weak health systems. There are, in addition, other economic consequences that will cause a retraction in production, and the economy in general. With a recession that was already beginning to bite before the pandemic, Latin America faces severe political challenges and citizen security risks. The virus threat is a "perfect storm" of governance.

The governments of the region have taken a series of measures to protect their citizens and contain the spread of COVID-19, echoing the WHO's recommendations, but these responses have shown two divergent and contradictory paths, that in turn come into tension with any possible regional coordination. The first path situates health at the core of a nationalist revival, as a threat to "national security", through which states seek to protect their citizens. Specifically, Argentina and Colombia decreed the mandatory quarantine. Bolivia and Chile, the closing of borders. Ecuador and Peru, the curfew, plus a general suspension of flights and restrictions on immigration policies. In Chile, Sebastián Piñera declared a state of emergency, leaving internal security and the custody of health services in the hands of the armed forces.

The second axis perceives health as a political hindrance: in Brazil and Mexico, despite having registered deaths due to the coronavirus, governments have been ambiguous in their measures and in the restrictions imposed to stop the pandemic. Its leaders, Jair Bolsonaro and Andrés Manuel López Obrador, privileged their appearance in mass popular events, and promoted demonstrations and mobilizations in political events. In the case of Brazil, despite being a hot spot for the virus given the geographical dimension of the country, President Bolsonaro has spoken about its threat with scepticism – considering the virus as a "little flu", or "a fantasy”, while rebuking governors for instituting mandatory quarantines in some of the main states of Brazil. Here, as in Mexico and in the United States, the political dimension, and to a large extent an economic motivation, seems to prevail over sanitary measures.

Despite their nuances, both responses move away from the concept of health as a common regional goal of geopolitics. Rather, national interpretations of what is risks and urgent replaces regional coordination.

Regionalism and Diplomacy in Health: Is There a Legacy?

Health has a long history of cooperation in Latin America and has shown that it can be a great channel for regional consensus, despite the differences that exist between member states. South America is one of the regions of the world that has taken the greatest steps in promoting regional cooperation in this regard. Thus, one of the learnings from the experience of UNASUR and Mercosur is that regional organisations can provide normative and institutional resources for the harmonization of international and national policies and the definition of regional strategies, which Acharya identifies as “normative congruence”. In this same sense, the added value of regional governance must be seen through the ability of regional organisations to “translate” international norms into local environments, sometimes merging with norms in force in the region and in domestic settings. Second, regional organisations can facilitate the mobilization of human, financial and knowledge resources in support of social policies. Regional agencies can also effectively assist continuity in the production and supply chain of critical medical products, vaccines, contraceptives and safe abortion devices, immunizations, food - all of which could be seriously disrupted by the impact of COVID-19. This is key if considered that the shortage and interruption of the supply of medical products and services can also increase the risks and deaths from unsafe abortions or teenage pregnancies, which in Latin America, among other emergencies, is already a public health challenge. Finally, regional organisations open political opportunities for promotion and collective action in international settings, to ensure investment flows in health systems and humanitarian support in the context of a health crisis.

In the current context incentives vary, and so do predictions about regional cooperation. It is difficult to think that health, for some a matter of nationalist revival and for others a political obstacle, can create integrationist ambitions. Still, cross-border dynamics may find ways to advance policy debate and specific practices. Mercosur members have recently agreed to share information and statistics on the evolution of the coronavirus, as part of a common strategy to combat the pandemic, as well as to eliminate obstacles that could hinder or impede the transit and transportation of supplies and essential elements, such as food, hygiene and health care products. New, more hybrid and less institutionalised regional initiatives such as PROSUR and CELAC, also agreed to share information and epidemiological surveillance.

In the meantime, whether regional cooperation may recover its fundamental place is still uncertain. Predictions seem to indicate that either regional organisations reclaim centrality as a tool of governance, or they will be the first political victims of COVID-19.