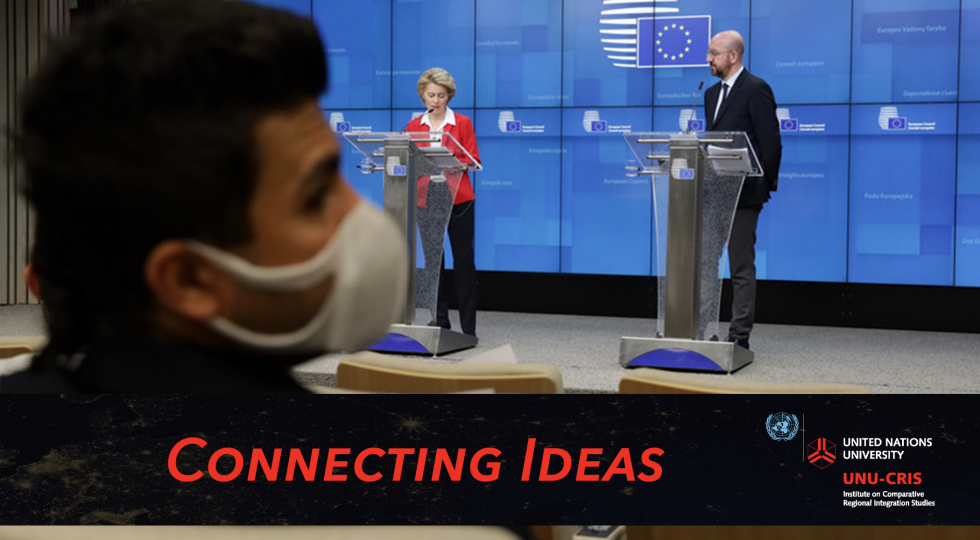 Emeritus Professor of International Political Economy, University of Warwick and currently Researcher at the Institute of European Studies and Distinguished Professor of Diplomacy at Vesalius College, Vrije Universiteit Brussel.

Academic Commissioner for International institutes and Networks at the Vrije Universiteit Brussel and the founding director of UNU-CRIS.

The Changing World Order and the COVID-19 Pandemic

In the aftermath of World War Two, a world order crystallised with the multilateral organisational structure as the playing field and states as the main players. The US and the USSR were the star players and the Cold War the dominant game. This was an American led, partial liberal order. The USSR was not following the liberal rules and was excluded from the playing field of the Bretton Woods institutions. For more than half a century, that world order remained intact. With the collapse of communism, the only star player left seemed to be the US, but the end of the Cold War unleashed several new dynamics. Today, that historical world order is unravelling rapidly in front of our eyes. The arrival of the COVID-19 pandemic seems to push the world further in a period of dramatic political and societal change.

However, the current world order was already at a crossroads prior to the arrival of the pandemic. Several explanations of this unravelling exist. They are multifaceted and often inter-connected. They include, inter alia, the rising challenges from China; the impact of digital information, communication technologies and social media on politics; the destabilising political impact of Middle East regional conflicts on migration flows to Europe as part of a wider global refugee problem of unprecedented and growing proportions (in excess of 70 million displaced persons worldwide); and the structurally disruptive impact of climate change.

The EU as a Global Player with ‘Mixed Messages’

Today, the EU remains one of the few serious international actors that believes in, and still mostly practices, a liberal view of world order as articulated in its Grand Strategic Vision Statement and echoed in its New 2019-2024 Strategy. The challenge facing the EU is what it might usefully do to secure positive reform to that order. The EU’s external relations cannot be just about geopolitics because, taken literally, the notion of geopolitics is guided by geographical factors in the determination of external political, security and economic relations. But more often than not, geopolitics is accompanied by the baggage of geostrategic thinking that reflects an understanding of foreign policy for most states driven implicitly, or in most cases explicitly, by aggressive nationalist sentiment. Now this is not, in our judgment, what is or should be driving EU policy, yet the EU seems to want to have its cake and eat it too. By trying to do so, it is sending out mixed message to the wider international relations and foreign policymaking community. The EU cannot have it both ways and should be cautioned against a full-bore commitment to geopolitical strategic thinking.

In terms of both intellectual tradition and practice, the geopolitical disposition is at odds with the path the EU has taken over the last several decades, especially in its commitment to collective problem solving in multilateral institutional settings. For all the challenges, limitations and weaknesses, multilateral collaboration has exhibited of late it is still the best approach for the EU to articulate and propagate in pursuit if its international politico-strategic and economic well-being. For all its good intentions, the EU should be careful what it wishes for if it intends to pursue a more aggressive forward leaning role beyond its borders.

The EU knows what it does not like about the current international order: it explicitly rejects a Trumpian view of world order, especially his bilateral-cum-transactional hostility to multilateralism, yet it currently lacks a coherent strategy to secure what it does like. This strategy, rather than a geopolitical strategy, is indeed the road to which the EU should adhere over the next five years. Put bluntly, the Commission’s role should be to avoid getting tied up in the game of geopolitics and its contemporary imperatives wherever possible. The EU’s long-standing instinct to resist geopolitical imperatives in favour of a commitment to global, collective action problem solving in multilateral institutional contexts is not wrong. The EU does not think like the other geopolitical powers but it currently has an underdeveloped voice in the debate over world order.

The unraveling of the liberal order and the as yet scratchy geopolitical contours of any future world order pose a range of generic policy questions in need of answer by those who would guide the EU’s external relations over the next five years. What must be done is to remove ambiguity from the EU’s external policy by focusing specifically and precisely on topics and regions that matter to citizens directly - security, migration, climate - but also other things that might seem one step removed from everyday life yet actually have a considerable impact on citizens, such as the defense of multilateralism and the near neighborhood.

Beyond its epidemiological implications, COVID-19 will usher in a new period of wider dramatic political and societal change. For some, the state-led attempts to combat COVID-19 will result in a permanent tighter grip on citizens, and the need to collect data at a large scale is by others seen as a step towards an Orwellian society where privacy is at risk. And then there are some states where the political rulers are misusing the COVID-19 crises as justification for their anti-migration policies or for destabilizing other states. For the EU, the most important side-effect of the crises is the lack of internal solidarity between the Member States.

On current observation, it would be fair to suggest that the nationalist response is in the ascendency.  COVID-19 is exacerbating, rather than mitigating, the prospects of a new bipolar order built around the influence of a declining USA and a rising China. It seems clear that China, notwithstanding its initial lack of transparency and candour as the source of COVID-19, is winning the international propaganda soft power battle the pandemic has generated with the USA, as the respective asymmetries in their international relations diminish. This situation, we would argue, makes it all the more important that the EU adheres to and enhances its traditional commitment to a multilateral collective action approach to international relations.

We are moving into a new era and the EU should be a voice in the discussion over what this newness shall look like. To make its contribution, the EU must decide what is going to be the prominent message it wishes to put forward. Two competing views are presently to be found emanating from the Commission’s senior leadership: (i) the idea that this Commission will be a “geopolitical commission” for an increasingly geopolitical world and (ii) a continuing commitment on the part of the EU, if the rhetoric is to be taken seriously, to the values of multilateralism and cooperative, collective action problem solving.

These competing views are leading to contradictory messages as they have never sat, and do not now sit, easily together. The EU needs to resolve what is looking increasingly like a “Mixed - contradictory even - Message Strategy.” Sometime soon choices will need to be made. The EU should not make the mistake of thinking that the only way it can be a “player” in the contemporary order is by mimicking the behaviour of the other major players; that is by becoming a “realpolitik” driven geopolitical player itself. If the EU really believes in its internationalist values, it should stick to them and make it clear that the EU is driven by the pursuit of geosustainability through multilateral cooperation, not by geopolitics and its related nationalist assumptions of closure to the wider world.

Besides, the current pandemic is not the time to weaken collective action at the global level. The pandemic is proof positive of global interdependence and a global pandemic demands a coordinated global response even though, as yet, nations continue to pursue solo efforts. Even within Europe, there is a lack of solidarity. For sure de-coupling is fashionable, and with the aid of AI, robotics, 3D printing and automation increasingly possible, but in a world of digital communication, there is a limit to the degree of de-coupling that can actually occur. Let us not forget that technology is now global, not only in its distributive effects, but also in its consequences. Viruses, both in humans and computers, acid rain, radiation and the like do not need passports and become trans-sovereign in their impact.

If the pandemic can shock global leaders to recognise what is lost by the pursuit of great power competition and the failure to cooperate in multilateral decision making on global policy issues, then COVID-19 would have served at least one useful purpose.  If it is not to lead to a progressive, de-coupled, closed international order, we need a new, reafirmed, hard headed internationalism of the kind that characterised the immediate post-World War Two era and that blossomed again briefly after the end of the Cold War, and an EU contribution to global leadership in this process  remains pivotal.

This blog is based on a working paper in the UNU-CRIS Working Paper Series:

Avoiding “Mixed Messages” (in times of COVID-19): Towards a Consistent EU Position on World Order