The EU as a Peace and Security Actor in Regional Conflict

Even if most contemporary violent conflicts are defined as intra-state or ‘domestic’, they invariably spillover to neighbouring countries and become ‘regionalized’. An examination of the European Union’s engagement in various regional conflicts in Africa and the Middle East shows that the EU often overestimates its own achievements and impact. In a few cases, the EU has played a limited and arguably successful role. One arguably positive example which is often referred to, is Operation Artemis in the Democratic Republic of the Congo (DRC) in 2003 in which the EU quickly militarily intervened and prevented further violence until the UN could mobilise a more comprehensive and longterm peacekeeping mission. However, in most other cases where the goals and mandates are more comprehensive, the EU’s policy has been much more problematic. Due to a general lack of genuine conflict analysis, the EU’s policies are generally not adapted to the complexity of current regional conflicts. This has led to counterproductive effects on the ground. Other weaknesses include both the Union’s internal institutional fragmentation and poor cooperation with other actors. Taken together this leads to the conclusion that the EU tends to be more concerned with establishing a symbolic presence and political representation than achieving real results that may help those affected by ongoing violent conflict.

Del 4.9 Policy Brief on Regional Conflict.pdf
Project:
The EU as a Global-Regional Actor in Security and Peace (EU-GRASP) 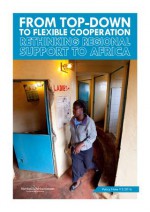 From Top-Down to Flexible Cooperation - Rethinking Regional Support to Africa