Gaëlle is a PhD Fellow at UNU-CRIS focusing on access to social welfare and social services in situations of regional separatism. Her research investigates civil society organizations’ role in facilitating this access within and across de facto borders. The two cases study she looks at are Abkhazia and Transnistria, two de facto states which parted respectively from Georgia and Moldova in the 1990s.

To pursue this research, Gaëlle works under the supervision of Professor Dr. Ine Lietaert, Professor Dr. Fabienne Bossuyt and Dr. Giacomo Orsini, all affiliated to Ghent University (Department of Social Work and Social Pedagogy and Department of Political Sciences). Gaëlle is also an active member of the Center for the Social Study of Migration and Refugees (CESSMIR).

Prior to this, Gaëlle worked as a researcher at the Department of Social Work and Social Pedagogy at Ghent University. She was involved in two research projects Horizon 2020: RefugeeWellSchool aiming at improving the wellbeing of refugees at schools and InHere standing for INclusive Holistic care for REfugees and migrants victims of sexual violence in Belgium, Ireland and the United Kingdom.

Over the past years, Gaëlle was a project manager at the Development Office of the College of Europe (Bruges) and prior to the French Embassy to Croatia. She designed and implemented numerous training programmes on EU matters and worked with civil society organizations in Croatia and Russia on projects mainly dealing with ethnic minorities, migrants and refugees as well as memories and narratives in post-conflict societies. She also performed internships at the European Delegations to Ukraine and to Moldova and at the French Embassy to Russia.

She was awarded a full scholarship to study at the College of Europe where she conducted a research project focused on the European Union’s soft power toward its Eastern neighbourhood with Ukraine and Georgia as case studies. She also received a grant to prepare for the French Ecole Nationale d’Administration (ENA) during a nine-months training programme (Prep’ ENA). 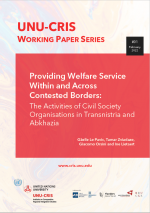 Providing Welfare Service Within and Across Contested Borders: The Activities of Civil Society ...